Hawaii seems to be off the hook; they seem to have isolated it to one state employee doing something stupid, in a system that's very stupidly designed.  I mean if I accidentally hit delete on a file, Windows or iOS are setup to make sure you really meant to delete it.  If you go to wipe your iPhone, you have to go through that several times - someone's way of saying, "are you paying attention here, Skippy?"  In a way, though, hackers are less upsetting than incompetence.  To quote Jim Geraghty from National Review:


“This guy feels bad, right. He’s not doing this on purpose. It was a mistake on his part and he feels terrible about it,” explained Hawaii EMA administrator Vern Miyagi, a former Army major general. But Miyagi declined to say that the staffer would face any disciplinary actions. Richard Rapoza, the official spokesman for EMA, declined to identify the errant employee and added, “At this point, our major concern is to make sure we do what we need to do to reassure the public. This is not a time for pointing fingers.”

Actually, it is. In the Air Force my father served in for some 20 years, anyone who committed such a blunder would have been demoted or cashiered — along with any superior officer, such as Miyagi, who had failed to put in place redundancies to prevent such a fiasco. That kind of accountability strikes me as a pretty good way to start to “reassure the public.” It’s not as if EMA didn’t have any clues something was potentially wrong. The Honolulu Star-Advertiser reported that while 93 percent of test alerts issued last month had worked, some could hardly be heard and a dozen mistakenly played an ambulance siren.

Isn't it better to think some advanced, hacker with l33t skillz carefully broke down firewall after firewall until he could scare the bejeezus out of everyone in the state than it is to realize the truth of what happened?  A common story after the incident was that a portion of the population ignored the warning because they know the state is so incompetent they couldn't have gotten it right. 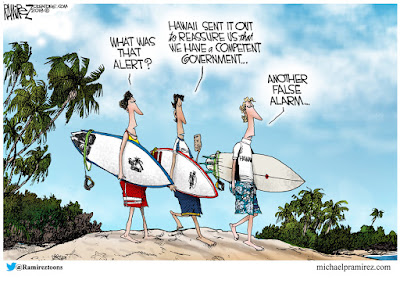 Japan, though, is a bit more unsettling.  There have been no equivalent stories from the Japanese government that I can find.  Was Japan's alert a cyber attack?

At least from what I hear.

So I'd assume the Russians and the Chinese might have an interest in setting the west on edge and sowing chaos.  Anything that gets us "off our game" is something China is good with.  Putin is longing for the glory days of the old Soviet Union - he wants to Make Russia Great Again.  Of the three of them, he's the most transparent of them all.  Putin wants - ruthlessly demands - raw power.  Anything that diminishes any other power in the world is good from his perspective.  The Norks are just about as transparent.  I think the best insights you'll get on North Korea are coming from LL at Virtual Mirage.  Kim Jong Un thinks he's going to reunite the Korean peninsula and be master of them all.  In Kim's mind he sees a confrontation with us as "you have 4000 nuclear warheads and I have two, so we're tied".

So from an overview, I think any of the three of them could have done it.  But the incompetence is still more frightening than the hackers