Regular readers will know that my taste in movies tends to escapist things like Sci-Fi and comic book movies, not serious films about the human condition.  Today we went to see Darkest Hour, the movie about the first days of Winston Churchill's term as Prime Minister of the UK.

Over the years, I've realized that my education in history is lacking, and while I think the movie is historically solid, I'm not enough of a Churchill scholar to know.  Larry P. Arnn, president of Hillsdale College and an actual Churchill scholar, though, says it is and it's worth seeing.  For my part, I've always been an admirer of Churchill, although in the last 20 years I've come to wonder if I really know the man or just a mythology that percolated around America in the 60s to early 70s; while I had the various history classes I was required to take.

I haven't heard much about it besides recommendations from Rush to see it.  All I had really heard was that Gary Oldman did a wonderful job of capturing him and should get a Best Actor Oscar for the movie.  What I hadn't heard was about the great supporting cast, including Dame Kristin Scott Thomas as his wife, Clemmie, and Lily James as his secretary Liz Layton. 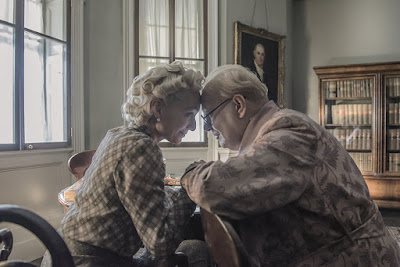 This is not a bright and cheery movie.  What little humor there is comes from Churchill's quips to other people and one or two witty moments.  It depicts Churchill in a politically awful position, given the position just as Europe is falling to Nazi Germany; resented awfully by the man he replaced, Neville Chamberlain, and the man who seemed to think he should have been given the role, Viscount Halifax.  Hitler's army is sweeping western Europe, pushing the English army onto the beaches of Dunkirk, while Austria and Holland fall, and France breaking down.  His military is telling him they can do nothing to rescue the Army from Dunkirk.  He wants to fight but is being told he has no military that can do anything.

I usually rate movies on a 1 to 5 scale, and I give this a 5.  The acting was remarkable and the way director Joe Wright chose camera angles created vivid imagery.  He'd choose things like the view out of the window of a limousine to drive home how Churchill was seeing people and things in the street, or aerial views to show the impact of the Nazi bombing in France, or a view of spiraling staircase with people moving every which way to convey how urgently busy everything was.   I think it's well worth seeing.