Switching Projects for a Little While

I've temporarily put aside the variac box I wrote about earlier in the week, to switch over to the antenna project I wrote about last month.  Why?  This project has a deadline of sorts, a major ham radio operating event at the end of this month.  I need to get the antenna built and begin testing it to evaluate its performance and that's a priority.  Within a week or two, I'd like to know how it works on both bands it was intended for and know how it compares to what I have.

Yesterday, I cut all the PVC and glued it up. 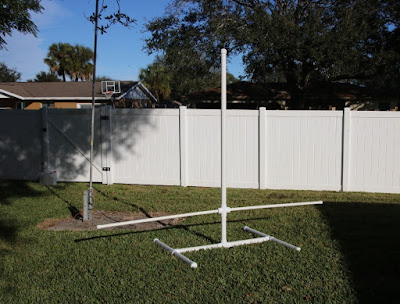 The wire isn't installed.  Wiring everything up and getting it ready to test was today's project. 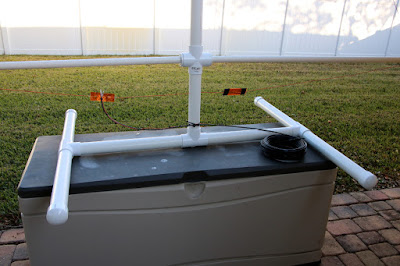 You might have noticed the pieces of orange plexiglass.  That's some scrap that was left over from making the cover for my CNC control box.  We've had that plastic around for at least a decade.

This plastic storage bin on the back porch made an acceptable workstation.  I carried my Metcal soldering iron out there and kept adding more tools as the afternoon went by.  It was in the low 50s and breezy all afternoon which felt a bit cool to me.  The sun peaked out now and then making it comfortable, but I ended up wearing a wind breaker over a long sleeved Tee shirt for most of the work.

The K9AY antenna uses a terminating resistor (at right) and a matching transformer (on the board on the left).  The terminating resistor's value by what's marked should be 490 ohms, but measured closer to 520.  The actual optimum value is probably a bit lower, and that's probably an experiment I'll be doing.  Everything is unprotected from the elements, just bare soldered wire and parts so that I can get to that resistor or to the transformer, should I need to change that.  Another reason for the deadline date on this project.

The slow part about today was that I hadn't looked into the details well enough to have parts prepared and ready to mount, so finding resistors, winding and testing a transformer, then cutting and drilling the plexiglass was part of the day.

Tomorrow will be time to feed the coax through the wall feedthrough into the ham shack and begin the evaluations.  The resistor and feed polarity give the antenna a direction; I believe the "front" is on the left in these pictures, but that's the first thing to determine.