This week we get two.

The first is an interesting development that's a refinement of the very first 3D printing format, stereolithography.  In this form of printing, a laser traces out the outlines of the layers of design being printed on the surface of a bath of liquid resin.  At the start of the print, there's a metal tray just under the surface of the pool. The resin polymerizes into a solid, the tray drops a few thousandths and the next layer is scanned.  Eventually the entire object is printed, the tray is raised back to the top and the printed piece removed.  (The "splash" in this print is the 3D printed object itself) 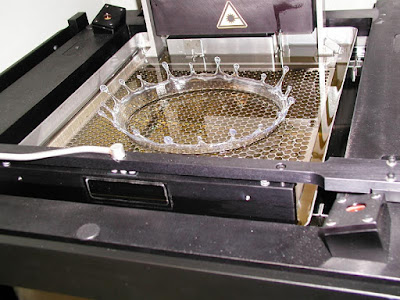 The new process is more like a hologram, with the laser projecting deeper into the fluid, polymerizing 3D structures directly, not just doing a scan on the surface - 2D that builds up 3D objects.


[...] by using laser-generated, hologram-like 3D images flashed into photosensitive resin, researchers at Lawrence Livermore National Laboratory (LLNL), along with collaborators at UC Berkeley (link is external), the University of Rochester (link is external) and the Massachusetts Institute of Technology (link is external) (MIT), have discovered they can build complex 3D parts in a fraction of the time of traditional layer-by-layer printing. The novel approach is called “volumetric” 3D printing, and is described in the journal Science Advances (link is external), published online Dec. 8.

“The fact that you can do fully 3D parts all in one step really does overcome an important problem in additive manufacturing,” said LLNL researcher Maxim Shusteff, the paper’s lead author. “We’re trying to print a 3D shape all at the same time. The real aim of this paper was to ask, 'Can we make arbitrary 3D shapes all at once, instead of putting the parts together gradually layer by layer?' It turns out we can.”

Volumetric 3D printing creates parts by using three overlapping laser beams that define the object’s geometry from three different directions.  This creates a hologram-like 3D image suspended in the vat of resin.  The laser is left on for about 10 seconds to cure the object (too long and the entire bath solidifies!).  Then the excess resin is drained, note there's no precisely moved tray like the one-layer-at-a-time system, and the fully formed 3D part remains.

This is still leading edge research at Lawrence Livermore National Laboratory, and the things they're printing are pretty small.  Another issue is that there are restrictions on part resolution and on the kinds of geometries that can be formed.  Extremely complex structures would require more than three intersecting laser beams and would limit the process.  It will be a while before you can order one of these printers from your favorite retailer, but it's pretty interesting to see.

The other new 3D printing tech is a way of printing composite materials with fibers embedded in a plastic matrix.  Called "rotational 3D printing", the new technique allows for precise alignment of the fibers to get the desired properties.


The key to their approach is to precisely choreograph the speed and rotation of a 3D printer nozzle to program the arrangement of embedded fibers in polymer matrices. This is achieved by equipping a rotational printhead system with a stepper motor to guide the angular velocity of the rotating nozzle as the ink is extruded.

"Rotational 3D printing can be used to achieve optimal, or near optimal, fiber arrangements at every location in the printed part, resulting in higher strength and stiffness with less material," Compton said. "Rather than using magnetic or electric fields to orient fibers, we control the flow of the viscous ink itself to impart the desired fiber orientation."

This method is aimed at answering a different question than the first one.  The first one is asking "can we speed up the method of printing?" but it also offers the promise of removing the layers and "jaggies" that 3D prints can have.  The rotational 3D printing approach seems to be asking for more control of exactly how the print is made, at the expense of the additional stepper motor, driver and so on to control the rotation of the print head.  The resin model isn't capable of having fibers at all, so they're aimed at different uses.