The British Navy recently launched a new aircraft carrier, the HMS Queen Elizabeth.  As is the usual routine, the ship is undergoing a period of sea trials to evaluate how well everything performs.  A couple of weeks ago, the story broke to much fanfare that the ship was leaking and might have to go to dry dock for repairs.

The part I find puzzling?  A big deal is being made over this:


A faulty seal around one of the vast warship’s propeller shafts means 200 litres of sea water pour in every hour.

As a reference to those of you who aren't boaters, here's a low cost bilge pump I've had on a fishing boat before.  For a mere $70, one can buy a bilge pump that will pump out 750 gallons per hour, 14 times as much as is leaking into the carrier.  I know a MilSpec version of that plastic pump will cost at least five times that, but they could still deploy dozens of those on the ship.  And guess what?  Ships that size have pumps.  A little shopping at a Marine Supplies store like West Marine or Overton's will show you bilge pumps for the recreational boater that vastly exceed the capabilities of that little Rule 750 GPH pump and vastly exceed the amount of water leaking in.

If my boat was taking on 53 gallons per hour, I'd run the pump for 4-1/2 minutes every hour and keep an eye on it to make sure it's not getting worse. 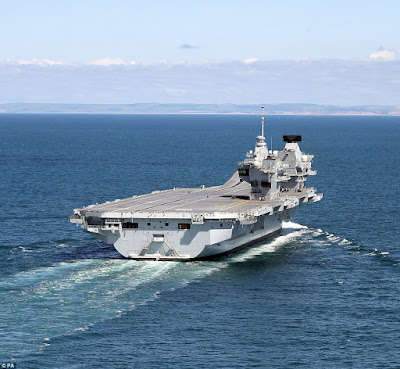 (HMS Queen Elizabeth, heading for her home port of Portsmouth)

So why the kerfuffle?  That's my puzzle.  First off, the purpose of sea trials is specifically to find issues like this.  None of the companies who built the "largest warship in UK history" are contesting that they're at fault.  The Sun reports:


An insider added: “We’re about to uncover the true cost of carrier ­operations.

"There is a feeling that the ACA mugged us off by not sorting this before the handover.”

The Queen Elizabeth is currently in Portsmouth and may need to go back into dry dock to be fixed.   [Note: the ACA is the Aircraft Carrier Alliance, a grouping of BAE Systems, Babcock and Thales, who built the ship - SiG]

The BBC has what seems like a bit less sensational summary.


The truth is similar leaks in other warships are not unusual and can be fixed relatively easily.

The difference this time though is the scale of HMS Queen Elizabeth and the fact it has just been handed over to the navy.

The big question is whether the leak can be fixed while it is still in the water.

The navy insists the job can be done without her going back to dry dock, which would be costly and add to delays.

Either way, the navy insists the fault will have to be rectified and paid for by the contractors, along with a list of other "snags".

I just don't see what the big deal is.  While I don't claim Naval experience, I think if you buy a multi-billion pound aircraft carrier and this is all that's wrong, you've done pretty damned well.  Perhaps it's some sort of UK politics, which I have to admit is rather opaque to me.  Perhaps someone from the UK might comment if I've missed things.