Is a 50 Year Old Treaty Holding Back Private Space?

Fifty years ago, there were two entities on Earth engaged in "race to the moon".  In what's considered a landmark agreement between the US and the USSR, the Outer Space Treaty (officially it's the United Nations Treaty on Principles Governing the Activities of States in the Exploration and Use of Outer Space) declares that “the moon and other celestial bodies shall be used by all states parties to the treaty exclusively for peaceful purposes.” It says nothing about businesses or individuals, just states.  Therein lies the problem.

Unfortunately, now it appears to be getting in the way of private space-exploration as a profit-making venture.  As the New York Times put it (in a surprising article) "If No One Owns the Moon, Can Anyone Make Money Up There?"

Meet Robert Richards, founder of a company called Moon Express, now moving into facilities on Cape Canaveral, in what's called the unmanned side (Cape Canaveral Air Force Station), since all manned flight since the Gemini program in the 1960s moved to Merritt Island and the Kennedy Space Center:


Moon Express occupies Launch Complexes 17 & 18 at Cape Canaveral Air Force Station, adjacent to the Kennedy Space Center on Florida’s Space Coast, where many of the robots that explored new worlds and unlocked the secrets of our solar system began their journeys. We are now honored to be able to re-purpose these historic sites into a vibrant new commercial spaceport, approximately 70 acres of facilities and range, supporting Moon Express spacecraft development and test, and incubating fresh new dreams of extraordinary adventures into the space frontier. 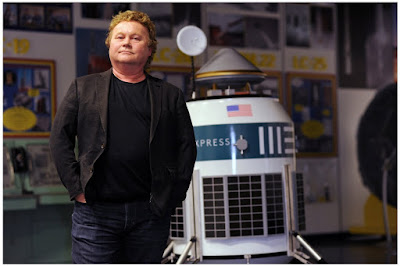 (NY Times photo)
This year, the 30-employee company aims to be the first private company to soft land a satellite on the moon, and perhaps win $20 million in the Google Lunar X Prize competition. To quote the NY Times,


It is investing at least $1.85 million to renovate decades-old buildings here. The company is transforming a parking lot into a miniature moonscape, and will also set up an engineering laboratory, a mission operations room and a test stand for spacecraft engine firings.

Moon Express would not need all of these facilities if its only goal were to win the Lunar X Prize.

Its second spacecraft aims to land in 2019 near the moon’s south pole. A third, larger spacecraft in 2020 is to gather samples and then bring them back to Earth, the first haul of moon rocks since a Soviet robotic probe’s return in 1976.

It's that third probe that ran into the Outer Space Treaty and impacted their plans.


Moon Express ran into a bureaucratic wall because the treaty declares that activities of nongovernmental entities — a classification that includes commercial companies — “require authorization and continuing supervision” of the government. (The United States had insisted on the clause, rejecting the Soviet view that space exploration should be limited to governments.)

“We had a mission planned, we had investors invested, but didn’t have a way forward at the end of 2015,” Dr. Richards testified during a Senate committee hearing in May. “There wasn’t anybody that didn’t want to say yes. There was just no mechanism to do so.”

But the United States does not as yet have a process for authorizing or supervising novel endeavors like a private company landing on the moon.

Moon Express spent about a year working with the F.A.A., the State Department and other agencies to jerry-rig what Dr. Richards called a “temporary patch,” using the F.A.A.’s existing authority to review rocket payloads in order to gain the approval Moon Express was seeking.

As all of you gentle readers well know, Moon Express isn't the only company trying to go down this path.


Elon Musk, the billionaire founder of SpaceX, boldly proclaims that his company will begin sending colonists to Mars in a decade. Jeffrey P. Bezos, the founder of Amazon, is using part of his fortune to finance his rocket company Blue Origin, and predicts millions of people will be living and working in space.

As these companies go where no businesses have gone before, they raise questions only fuzzily addressed by the Outer Space Treaty: What are private companies allowed to do in space? Can a company mine the moon or an asteroid and then sell what it has pulled out? How are countries to regulate these businesses?

This problem with one business launching a probe to the moon reflects the larger world we live in.  If there's something you want to do, is it best to consider it legal unless it's specifically forbidden, or is it best to consider it forbidden unless it's specifically allowed?  When I was a kid, walking around the areas well outside the neighborhoods with a .22 plinking at tin cans and whatever we found, I would have never hesitated to say everything not specifically illegal was something we could do - limited by our own ethical systems and the community's enforcement of theirs.  Clearly the bureaucrats here felt it was illegal since it wasn't specifically allowed.  Today, I think the US has morphed to that view.  Everything is illegal unless it's specifically permitted.  (and this is something I fear far, far more than something like "fix NICS" - because we're rapidly approaching a time when our "3 felonies a day" become 5, then 10 or 20 because everything becomes a felony - and everyone is a prohibited person).

Getting back to the story, the FAA fix is valid for one launch only.  Although Richards and Moon Express believe they will eventually be able to launch everything they want, all private space industry is working with this risk hanging over their heads.


Another space upstart is Planetary Resources, a small company located in an unremarkable office park outside Seattle. Its early investors included Larry Page, co-founder of Google, and Charles Simonyi, a former chief software architect at Microsoft. The company is also taking advantage of an investment from the Grand Duchy of Luxembourg.

Planetary Resources’ goal is to mine the solar system’s asteroids. Luxembourg, a nation smaller than Rhode Island with a long history in mining, has bet 200 million euros — more than $225 million — on this industry that does not exist. That includes $28 million invested in Planetary Resources. In return, Luxembourg owns a 10 percent share of the company, said Etienne Schneider, the country’s deputy prime minister.
...
For Planetary Resources, the first wave of development is to culminate in a doughnut-shape spacecraft heading on a prospecting mission to a near-Earth asteroid in 2020.

Sometime after that, the company hopes to mine in earnest — for seemingly mundane water ice. But water, in addition to potentially providing something to drink for astronauts, can be split into hydrogen and oxygen. Both can be used as rocket propellent; the oxygen, of course, also can provide air to breathe.  [Note: if you separate water into Hydrogen and Oxygen with the intent of burning the hydrogen, there's no extra oxygen to breathe - SiG]

As a business, Planetary Resources is betting that by the time it extracts water from an asteroid, there will be a customer like NASA interested in buying water, hydrogen and oxygen.

Eventually, the company aims to extract platinum, currently worth more than $900 an ounce, and other precious metals.

To make these pursuits easier, Luxembourg passed a space law that took effect this summer. Planetary Resources has set up its European office there. Moves like this one are in part motivating policymakers in the United States to devote more attention to American laws that currently govern commercial space activities.

The good news is that, partially aided by Luxembourg passing its law, the US is now reviewing our own policies.   In the last session of congress, the House crafted a bill that would leave the Outer Space Treaty in effect, but create an Office of Space Commerce, which would have 60 days to decide whether to approve or deny a company’s application.  It never went farther.  Two years ago, Obama signed a similar bill that said private companies can own and sell what they extract, but that the companies cannot claim ownership of the celestial body itself.  This is in alignment with the language of the treaty. 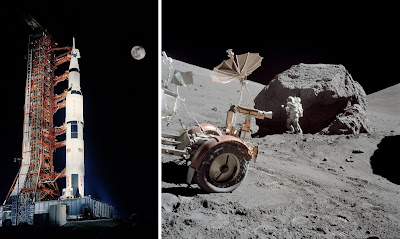 (NASA Photos from Apollo 17 - at right, Harrison H. Schmitt, an Apollo 17 astronaut, working beside a large lunar boulder on one of three moonwalks during that mission.)

This could be a great time coming for space exploration.  It's easy to imagine that having a handful of companies competing with cheap satellites could help lots of small organizations interested in exploring in space.  Moon Express' second satellite, for example, is going to carry a small telescope for the International Lunar Observatory Association.  Some locations near the lunar south pole, offering a continuous view of the universe, could be ideal for an astronomical observatory.  It's possible bidding wars for real estate in those locations could happen.


Dr. Richards compared this moment he sees coming to the 19th century California Gold Rush, when gold diggers jousted over the most lucrative places to sift ore. But he was confident that the new competitors would reach compromises.

“I don’t think there’s going to be bad players per se, but there could be arguments over areas of operation overlap,” he said. “But those are problems for the future, and that’ll be a great problem to have.”