The US Didn't Have A Spike in Violent Crime in 2016


Murders in the U.S. rose nearly 9% last year, and one-third of that increase came from just a few neighborhoods in Chicago, according to a Wall Street Journal analysis [paywall warning] of the FBI’s annual 2016 publication, Crime in the United States.

While violent crime (homicide, rape, assault, and robbery) also rose nationwide from 2015 to 2016 — over 4% — the data show the increase was not uniform, but rather concentrated in cities like Chicago and Baltimore.

Los Angeles and Washington, D.C., meanwhile, saw “meaningful declines in violence [that] have been sustained since the 1990s.”

This, of course, is hardly news.  Anyone watching the country knows that the worst of criminality falls in a handful of places, typically poor neighborhoods in big cities, and the root of the problem is gang violence and turf wars.  John Lott published a study in 2016 using 2014 crime statistics finding that murder in the US is very concentrated by location.


Murders actually used to be even more concentrated. From 1977 to 2000, on average 73 percent of counties in any give year had zero murders.

Criminologist David Weisburg of George Mason University criminologist, released a study in 2015 that described what he called the “law of crime concentration,” and “the criminality of place”: a disproportionate amount of any city’s violent crime occurs in a small geographic area of the city.  His data showed:

In many concealed carry classes you're dutifully told there's no such thing as a bad neighborhood that you can avoid to have no risk of violent attack.  While I agree with the sentiment that you should always be aware of your surroundings and that lightning can strike in odd places, these statistics show that statement is just wrong.  There are bad neighborhoods, and your chances of being involved in a violent crime are much worse in some places.  If you don't have to go there, don't go.

Complicating Weisburg and Lott's findings is the side effect of protests against police that have police vowing to have a lighter presence in the areas that need them the most.


A Pew Research Center poll from January 2017 showed that an overwhelming number of police officers say widespread protests following high-profile killings of black suspects have made police less willing to conduct basic police work, such as stopping and questioning suspicious people in high-crime neighborhoods, and using an appropriate level of force to diffuse a situation.

In Baltimore, violent crime rates were going down until 2015, when police officers “pulled back from a more proactive approach” following widespread city riots after the death of Freddie Gray, a 25-year-old black man who suffered a severe spinal injury while being transported in a police van on April 1, 2015, and died one week later.
...
Violence in Baltimore has stayed historically high following the riots, with arrests plummeting, shootings soaring, and the police force itself getting smaller.

One thing that has been proven to reduce crime rates is more proactive policing.   Yet the "Ferguson Effect" has caused an increasing reluctance of police to go into those neighborhoods, and more reluctant to carry out everyday tasks of policing.  You might have noticed that the left is currently lobbying for all of the things that make the murder rate worse, as in this gem posted at Gun Free Zone. 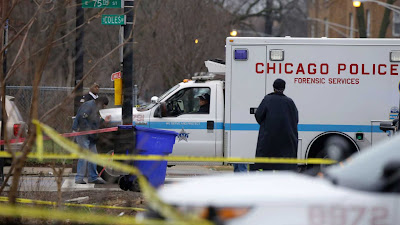 Remember: it's not gun control we need.  It's zip code control.