That's the sound of a smug, self-satisfied chuckle when something I designed behaves exactly as expected. 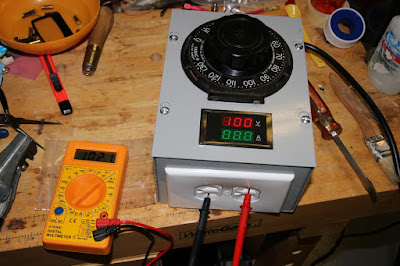 The LED display isn't popping out at you because of the flash picture, but the variac box works as intended.  It's reading 100V and 00.0 Amps while the yellow (Horrible Freight) voltmeter reads 102.  Which is correct?  Is either correct?  The digital voltmeter I trust the most isn't pictured, but it was close to midway between the HF meter and the .  It turns out that if I tweak the big variac dial until the box's display stops flickering 99 to 100 and back, the trusted DVM says just about 101.

Pretty much all of those are "close enough" for what I expect to be doing with it, which is primarily to reduce the line voltage to some of my older radios and things that haven't been on in a while in order to reduce the risk of something failing because it hasn't been on.


This variac is rated for 5A, which is enough to power anything I've got and maybe a couple of them at the same time.  Some collectors of vintage, vacuum tube gear (popularly called boatanchors) run all their equipment on a variac or fixed transformers to reduce the house line voltage a bit.  Over the years, the typical house voltage has gone up from more like 110 up to closer to 120, which I suppose was done by power companies to ensure that after the usual voltage drops folks at the end of a branch didn't get too little voltage.  The boatanchor collectors say that the higher line voltage stresses the parts too much.

On one hand, I can kind of see that, especially for some capacitors.  Most equipment has big electrolytic capacitors in it that can actually change value and running them at a lower voltage does what they call forming, and restores them to the right value.  On the other hand, one of the quotes that goes around about vacuum tube design is that transistors have limits, tubes have guidelines.  Typically, if you exceed the absolute maximum voltage on a transistor by even a little for a tiny amount of time, you generally let the smoke out.  If you exceed the voltage on a tube, it usually just shrugs it off.

Unlike this project, the antenna is fairly underwhelming and needs a little emphasis.  It delivers a bit weaker signal than my vertical when the radio preamp is on (on for the loop, off for the vertical) on the one band I was most concerned about.  On the other band, it's much worse than the vertical.  On the positive side, though, it delivers some of the claimed ability to null signals off the back.