There's Never A Shortage of Things to Repair or Replace

I don't know; maybe for some of you.  For me, there's a perpetually self-filling list of things to look after.

For the uninitiated, there's a very common and exceedingly useful piece of electronics test equipment called an oscilloscope, generally just called a scope.  In quick overview, an oscilloscope allows you to observe voltage waveforms; that is, the voltage vs. time in a circuit that's under test.  There are volumes written about them.

I have one which isn't working.  I bought a surplussed-out scope from my employer about 10 years ago, a Tektronix 475, which is an advanced model for a hobbyist, but primitive compared to modern scopes.  Like a lot of equipment nearing its end of life, these are prone to failures and mine did.  Last year, while working on my CNC control box, I had some signals I wanted to look at so I rolled the scope over to the shop.  When I turned on the oscilloscope the display wasn't acting right, and after a few seconds I got the unmistakable whiff of smoke coming out of it.  Since I was busy, I put it aside to troubleshoot later.  Being concerned about the age and safety of applying power to the scope is one of the reasons I built the variac box.

This week was time to open it up and see if I could find the trouble.  A 475 is one of a series of several models that Tektronix introduced beginning in the mid-60s, where higher numbers indicate higher speed (from 453 to the 485).  Mine has parts inside with what seem to be 1978 date codes, so it's either from late '78 or early '79.  They're also sometimes described as "15 pounds of parts in a 5 pound bag". 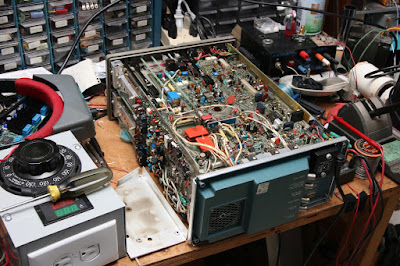 To get more to the story, between the two of us, Mrs. Graybeard and I have about 70 years experience as electronics technicians (being a good technician is often one of the most important parts of being an engineer).  For the last 30 years, I mostly worked on debugging things that had never worked, while she primarily was fixing things that once had.  The two of us dug into the scope as a team.  Much to my surprise, when I pulled the cover, there was no burned spot where something had obviously smoked.  She quickly went into full detective mode, sniffing the thing trying to localize the strongest scent of burned parts and sort of pushing me out of her way.  Kind of surprisingly, she fairly quickly found two high voltage diodes that were open - as in blown out.  Good diodes measure low resistance in one direction and higher resistance in the other; these both appeared very high resistance in both directions.  We spent much of the day trying to figure out what could have blown them up and don't really have an answer.  Diodes do "just fail", but two at once is way too much coincidence.

These are much higher voltage diodes than anything I have: they're rated 5000 Volts.  My searches for replacements were (1) nobody's got them, then (2) I have to buy a reel of parts for something like $56,000, and finally (3) I found that Mouser Electronics had an equivalent I could buy 10 for 76 cents each with no minimum order.  Doesn't $7.60 sound so much better than $56,000?  I got 10 so that we could replace the diodes and turn the thing on.  It's possible that will fix it, and it's possible these will blow up as well.  I'm betting it's more likely we blow up a couple more diodes.  But then maybe we can isolate what's going on better.  We have five chances.

Fixing electronics is my "home field advantage", and while the scope is rather inconvenient to work on, it's all parts with leads and that's easier to work on than a lot of modern electronics.  But it's still a PITA.

Adaptive Curmudgeon just posted a very relevant piece that sometimes it's really overwhelmingly tempting to say "eff this" and if I could find a guy who's expert in fixing these things that would do so reasonably (a whole replacement scope is probably $300) I probably would have someone else fix it.  If I can fix it for the $7.60 in diodes and some parts from my junk collection, it's worth it.