Is Bitcoin a Bubble?

Despite the incredible rise of Bitcoin in a short amount of time, I find this question surprisingly hard to answer.  (We can talk some other time about the wisdom of buying bitcoin; this is just about the wild run up in price over the last couple of years).

On one hand there are sure signs that this is an epic bubble.  Warning signs are all around.  According to The Atlantic,  "It Is Silly Season in the Land of Cryptocurrency" and they give reasons to back it up.


In October, the Colorado biotech company Bioptix changed its name to Riot Blockchain. The company’s valuation doubled within a few days.

This might strike you as an extraordinarily bizarre story. But even more bizarrely, it’s becoming ordinary. Weeks later, the British company Online PLC changed its name to Online Blockchain. The company’s shares jumped 400 percent. In December, the Long Island Iced Tea Corporation—which, as you might expect, sold iced tea—rebranded itself Long Blockchain. The company’s shares promptly rose nearly 300 percent. On Tuesday this week, the legacy photography company Kodak announced the launch of KODAKCoin, a “photo-centric cryptocurrency to empower photographers and agencies to take greater control in image rights management.” The stock rose 80 percent in a matter of hours.

People buying anything that seems to have even the most tenuous connection to bitcoin?  Are they crazy?  People are as excited as can be over investing in it and bubble warning signs like people borrowing money to put into Bitcoin and other cryptocurrencies are starting.

Certainly if you look at at this graph, put together by First in Freedom Daily (I added the color coded lines), Bitcoin appears to be the biggest price run-up in history dwarfing the famous Tulip Craze of 1634-37 and monstrously larger than the 1990s tech bubble.  The Tech Bubble is barely visible at the bottom of this plot (a light blue trace); even the Roaring 20s bubble that led to the Great Depression is hard to find on this scale. 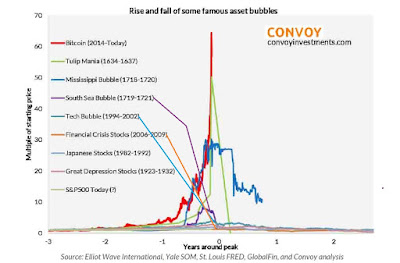 The first time I became aware of a stock market bubble was long ago.  Over the boom/bust cycles since then, I came to think that a sure sign that a crash was imminent was a news story of some kid who either quit college to be a trader or house flipper or whatever the new craze was.

On the other hand, there could be something real here.  The technology behind the cryptocurrencies is called blockchain, and it could be a real game changer in a lot of ways.  Briefly, for those who haven't run into anything about this, a description from the Atlantic:


At the most basic level, it is a record of information stored on a network of computers. When people use a cryptocurrency like bitcoin to buy a pizza, a kilogram of illegal drugs, or a yacht, these digital transactions are approved by a network of computers around the world running bitcoin software. Each batch of these transactions—a “block”—gets a cryptographic code, a copy of which is posted to every computer in the network. These blocks are permanently linked to each other in a “chain” of publicly approved transactions that cannot be edited. Thus, blockchain.

In a way, the blockchain system is the opposite of Internet credit card security.  When you use a credit card online, you want all of your information hidden because if someone can get your card number and ID, they can steal with it.  With blockchain, the history of every coin is embedded in the chain of transactions.  Using bitcoin is like using cash in the sense that once it leaves your "wallet" it might be stolen (although that appears hard) but they can't go on a shopping spree with it.  By analogy, if buy a slice of pizza and give two bucks to the shop, those two bucks become their problem to keep from being stolen.

More importantly, Bitcoin was designed to emulate not just cash but gold.  Nobody has central control over the currency so nobody can inflate or deflate it to achieve some political goals.  There is no Federal Reserve Bank of cryptocurrencies.  The algorithms were designed to be resistant to computers becoming faster over time, so while someone can "mine" bitcoins by running software, it would be better for them to have a room full of computers than one supercomputer.   It costs energy and time to mine bitcoins.  Newer, faster computers are slowed by the algorithms so that technology doesn't give them an advantage in mining the "harder to mine deposits".  Much as the amount of effort required to mine gold is the same as it was thousands of years ago.  We have much better technology but the deposits are much harder to mine. Furthermore, just like the reality that the amount of gold in the crust is limited, the number of bitcoins is limited by the algorithms to 21 million bitcoins.  When all 21 million have been mined, the miners go home.

"Yeah, I got that, but is bitcoin a bubble??"  I think that yes, it's in a short term overpriced situation.  I think it's possible, even likely, that there needs to be some period of sitting in a trading range and consolidating (strangely, I run across this guy saying the same thing).  People need to settle down a little get some of the fever out of the market.  I think a drop in price of as much as 50% is not out of the question.  However, I also think it has a good future; that there's a real place for cryptocurrencies and they will make a comeback.  I think anyone buying now will never see the equivalent percentage increases in price the last few years have given us, but I wouldn't be surprised for someone buying on the next dip to make more common gains, like "a few" times what they paid.  Remember: it's widely recognized that the first commercial sale with bitcoins was a pizza order paid for with 10,000 BTC coins.  For two Papa John’s pizzas.  With coins around today's $14,000, that would be a $140Million dollar order.  I sure hope someone held onto those 10,000 coins because they'll never see that kind of gain again. 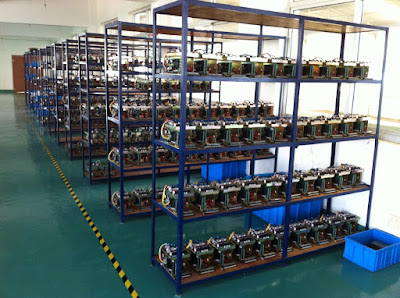