Yesterday afternoon, the Starship prototype Eileen had an apparently successful static fire of all three Raptor engines as it moves closer to its first hop.  Potentially this weekend or Monday. 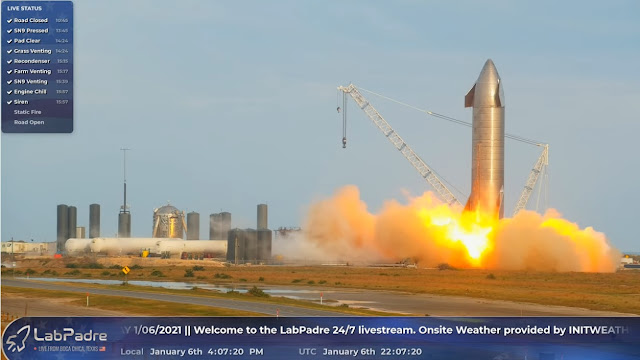 As I say, though, apparently successful.  Teslarati summarized it this way:


SN9 ignited all three of its Raptors in quick succession and shut the engines down over the course of 1.5-2 seconds – extremely short relative to all previous nominal Starhopper or Starship-mounted Raptor static fires. Long-time followers immediately noted that small discrepancy, speculating that it could either have been a post-ignition abort or intentionally shortened to avoid damaging the pad’s concrete surface (an incident that’s occurred several times during recent tests).

It seemed a little short by counting out seconds, which is approximate when I do it, and the test had some unusual aspects to it.  The most unusual thing is that unlike other static fires I've seen, they didn't empty the vehicle and give an "all clear" within an hour or so after the test.  As you can see in the picture, the test was at 4:07 CST (5:07 here).  I went over to the Webcam two hours later to see if anything was going on and saw signs that they might be setting up to do a second static firing.  That never happened and the author at Teslarati implies it might have been because of rain.  They also make clear that none of us know anything official unless SpaceX releases information, typically in a tweet or two from Elon Musk.

That means the unusual conclusion to this test might have been from troubleshooting some oddity they saw, or a shift to another cryogenic pressure test or something else entirely.  Another piece of evidence arguing something went wrong was that they canceled the road closures for today.

Two days ago, SpaceX was granted TFRs for flights to unlimited altitude on the 8th - 10th.  From where I sit, I don't think it will launch tomorrow, and if anything was wrong in yesterday's tests I think that lowers the odds that it can launch this weekend at all.