Getting to Know the New Tools

At the end of my postings on rearranging the shop back on the 9th & 10th, I mentioned part of the reason was to make room for a 3D printer in the shop.  As I mentioned then, the starter printer I bought was the Creality Ender 3 V2.  After a problem with UPS, chalk it up to the shipping backlogs people are talking about, the printer arrived on the 16th, originally promised by the 11th.  After spending time getting my engine to run, today seemed like a good day to assemble the printer.  It's mostly done, except for the final stages of setup and a thorough check out. 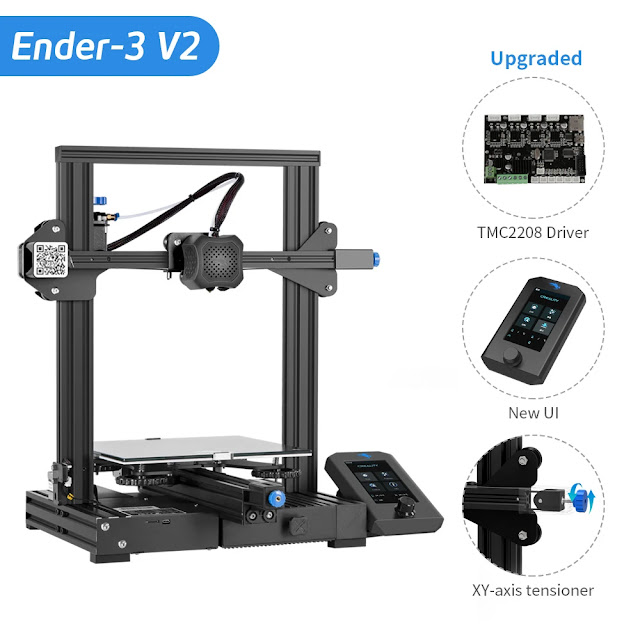 Creality photo, but you knew that.

Why did I go down this road?  Like lots of people, I've been intrigued by things I've read about 3D printing, known more broadly as AM - Additive Manufacturing, while the more familiar kind of machining is subtractive manufacturing.  Say I want to make something like the cylinder on my engine, very visible in the video Tuesday.  I start with a piece of metal, in that case a steel bar, and then using various tools and machines, subtract the right amount of metal in the right places until it matches the drawing.  With additive manufacturing, I'd start with nothing and then add material until it was done.

Printing metal is far beyond what I can do, but as printers have become more common, more and more people are using the 3D printer to create tools to see how they can improve their work.  I was really surprised to see these guys using plastic tools to bend sheet steel 0.134" thick.  This was PLA plastic, the most common kind and not one we think of as being strong.  I've more regularly seen guys printing things that I'd think wouldn't be strong enough, like one guy who printed bevel gears for an engine he was working on and it worked.  I can't believe it's as strong as one cut from metal, but it was definitely strong enough.

A couple of years ago, I did a post on how to make metal things from plastic prints.  At the time, reader Ratus and I had a conversation in the comment section.  He said he was surprised I didn't have a printer already, to which I replied I was a bit surprised, too, but I was considering making one.  At that point, Ratus said something that stuck in a background process in my head, "Build? Ha! ... You can't buy all of the parts for one as cheap as an ender3 'kit'."  That's what put the idea of that particular printer in my mind.

A month ago, I put together an email to him and asked some questions, basically if that was still true and still a good way to go.  Ender has many model printers and I was seeing several newer models.  He was a great help in getting to this point.

The learning curve now is going to be centered on learning to use the Slicer software provided with the printer, at least at first.  The process is very similar to what I've been doing with my CNC machining.  Parts are designed in CAD and then go through the slicer, which is a different kind of CAM (Computer Assisted Manufacturing) program.  When presented with a solid model, all the software knows is the outside shape of the solid.  The CAM program outputs the path of a cutter that takes away (subtracts) everything except the shape.  You tell the slicer how thick the walls need to be and how much fill-in plastic is needed between those walls and it turns those into the slices or layers that the printer makes.  The printer puts down thin lines of heat-softened plastic. 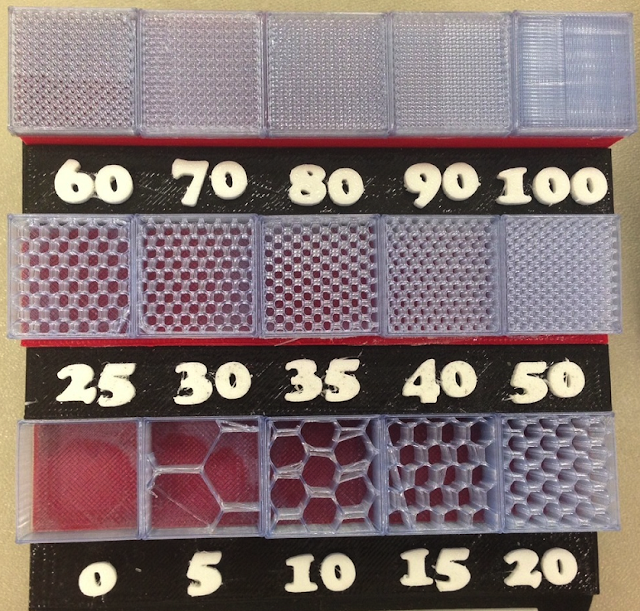 This shows the density of fill-in as a percentage of space inside a group of cubes. There are virtually catalogs of what the fill could look like instead of little hex-like bubbles: sharks, cats, honeycombs, you name it.  As density of the fill goes up, so does strength, weight and the amount of filament in the print.  It's another learning curve to climb.