SpaceX set four new records for the company but those tend to become mileposts other companies know about and see.  We were able to get a good view of the launch heading off toward the northeast, with liftoff at 8:02 EST this morning.  It was 49F with calm winds and the skies just had scattered, thin clouds.

First record: this was the eighth launch for booster B1051.  A completely nominal launch with the 60 satellites deployed on schedule.

Third record: the turnaround time for B1051 since its last mission was an astounding 38 days. Just last summer, SpaceX broke the 35 year old turnaround time record set by the Space Shuttle Atlantis, which had been 54 days, with a second launch in 51 days.  Everyone had been making a big deal about cutting the old record by 3 days.  The leap from 51 to 38, 13 days is 25%, compared to the 3 day jump last summer is dramatically different.

Fourth record: this requires a bit more explanation.  Today's launch was originally set for Monday (which would have been 36 days) but was held due to weather in the recovery zone.  The winds and seas were out of the limits for the recovery ships SpaceX has been using.  They decided that the winds were "close enough" to try; if the recovery went normally and the booster was in good shape, that extends their flight envelope.  If it didn't, and they lost the booster, then they had to stick to the lower wind limits.  B1051 nailed the landing. 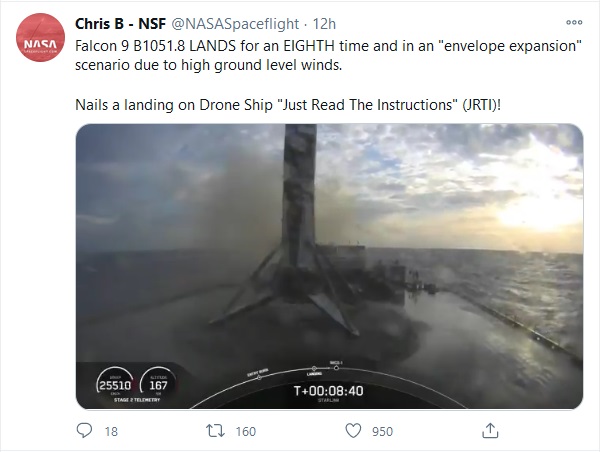 It has been frequently reported that the Falcon 9 was designed for 10 launches without "major refurbishment" - whatever that means.  They are inspected after every launch and anything questionable is either repaired or replaced.  B1051 is the most flown rocket in their fleet.  If they did even 50 day turnarounds, they could reach 10 flights with this booster in less than four months.  They have two more that have seven flights (if I'm remembering correctly) so that it seems like a safe bet they'll get to 10 flights of one booster this year.