In Other Space News

Virgin Orbit appears to be readying a test flight of their LauncherOne, an air-dropped small satellite lifter.  The tentative launch date is January 10th and the launch is likely to take place out of west coast facilities as did their previous attempt.  The one which ended with the launch vehicle apparently disintegrating soon after release.


LauncherOne is a rare air-launched rocket and is designed to be dropped from a modified Boeing 747 passenger jet (named “Cosmic Girl”).  For a cost of $12 million, LauncherOne will be able to place up to 600 kg (~1300 lb) into low Earth orbit.

Virgin Orbit also wants to develop a tiny third stage that would enable the small rocket to send payloads of 25-50 kg or more to the Moon and beyond.

The mission has bumped into this year after delays from Covid - they're in California - and going through periods when they didn't have enough people to get things done.


Similarly, startup Firefly Space, has been steadily moving toward the first test of their orbital class rocket, Alpha.  The last time we talked about Firefly Space, last March, they were talking about testing it "this summer" - as in summer of '20.  As you might expect, that was too ambitious. 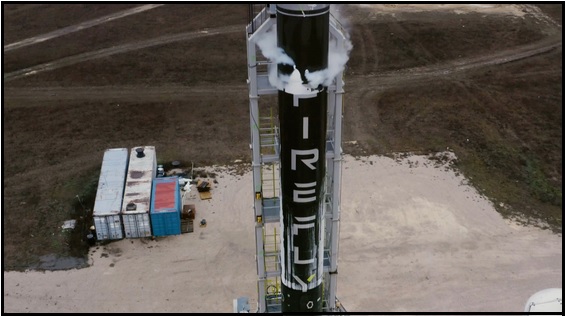 
Blue Origin made a show of christening a used cargo ship currently being modified into a seagoing landing platform for the New Glenn's massive boosters.  Since Blue Origin took possession of the ship - formerly known as Stena Freighter - more than two years ago, almost nothing has visibly changed.  The visible changes are the removal of two aft exhaust stacks and renaming the ship Jacklyn after Bezos' mother.  It appears to be nowhere close to ready for New Glenn booster landings.

Which may not be a problem because the New Glenn appears to be nowhere close to ready to fly.  Aside from two aluminum rings, maybe a fifth of a tank dome, and two "pathfinder" BE-4 engines that are (1) not meant for New Glenn and (2) not meant for flight, Blue Origin has yet to reveal New Glenn flight hardware of any kind. The last real official announcement of the first launch date ("2021") came almost two years ago in January 2019 and is now comically ludicrous with just ~12 months left and zero flight hardware in work.


Meanwhile, the last time we talked about the SLS static firing test, word was they hoped to resume testing this month.  They're close-mouthed about it and no news is available.  I'm trying.