A Study in Contrasts

I have to say I was surprised to see this but today, SpaceX put Eileen on a rolling transport to the test area.  Bluto (the crane) had been put in place yesterday.  Bluto lifted Eileen onto the new test stand around sunset this evening. 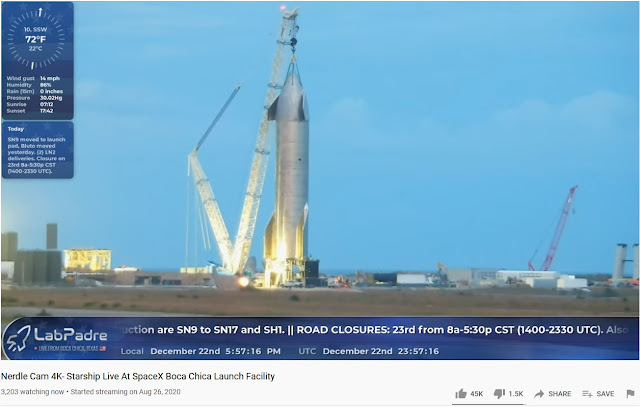 Back when they moved SN8's nose cone to the pad it took days to get to the milestone of lifting the nose cone onto the existing prototype.

Toward the left side of the picture, the test stand used for every launch to date is visible, yellow because of the flood lights on it (note the local time on the bottom - it's after sunset).  Visible in the distance between Bluto and Eileen, you can see the nose cone of SN8.  I've read the rest of the wreckage has been removed and many observers thought Bluto was only there to put that nose cone on some vehicle for transport back to the ship yard.

So now what? Eileen will undergo less testing than previous versions. More was known about how to build her than was known when SN8 was built on the test stand. Pretty much everything that allowed them to finish Eileen in the High Bay came from SN9. There's another road closure all day tomorrow, and I wouldn't be surprised if they did some pressurization tests, maybe cryogenic tests.


Meanwhile, at the Stennis Spaceflight Center, NASA's Space Launch System, SLS, had a "mostly successful" wet dress rehearsal (which they call a Green Run) as they prepare for a full static firing of that system.  I say "mostly successful" because of the last sentence in this paragraph.


Engineers working in the Test Control Center monitored all core stage systems during the test as propellant flowed from six barges into the core stage in the B-2 Test Stand at NASA’s Stennis Space Center near Bay St. Louis, Mississippi. First looks at the data indicate the stage performed well during the propellant loading and replenish process. Part of the test was to simulate the countdown with the tanks loaded, leading up to 33 seconds prior to the engines firing. However, the test ended a few minutes short of the planned countdown duration.

The article goes on to say that it appears to have been a software flake. That's my interpretation of this statement.  (Don't worry, probably just some uncounted Biden ballots got into their system)

The core stage and the B-2 test stand are in excellent condition, and it does not appear to be an issue with the hardware. The team is evaluating data to pinpoint the exact cause of the early shutdown. Then they will decide if they are ready to move forward with the final test, a hot fire when all four engines will be fired simultaneously.

It looks like they might be ready to static fire the SLS early in the new year. 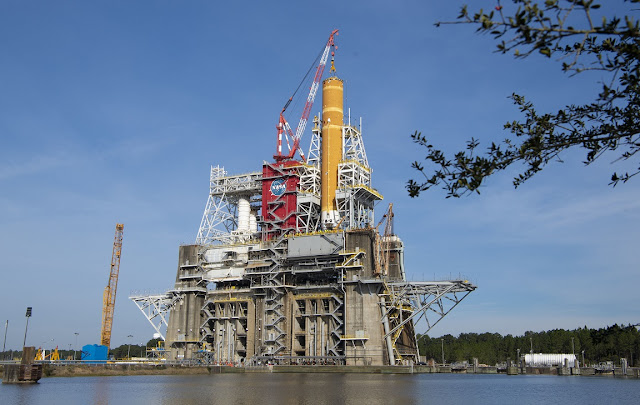 While on the topic of the SLS, back at the start of the month, I passed on a report that the White House was pushing Congress to allow the Europa Clipper mission to choose another heavy lift vehicle if SLS was not looking to be available.   According to Ars Technica's Rocket Report this week, Congress appears to have gone along with that.


In the final text of the appropriations bill for fiscal year 2021, Congress may finally allow this. Some conditions to be met ... Congress said NASA should launch the Clipper on the SLS if a rocket is available, and if a "torsional loading analysis" determines that SLS is safe to launch the expensive spacecraft. However, if these conditions cannot be met, the authorization bill allows NASA to conduct "a full and open competition" for a commercial launch vehicle. It is likely SpaceX's Falcon Heavy rocket would win this competition, but not certain.

One of the most unsettled areas of the SLS program and Artemis missions is the Exploration Upper Stage. This is just about as far from the level of the rest of the SLS as one can be: NASA and Boeing just completed the Critical Design Review for the program.  This is a larger, more powerful upper stage that will be used on the Block 1B variant of the SLS rocket, and enable the carrying of 10 tons of cargo and a crewed Orion spacecraft in a single launch.

Unfortunately ... neither NASA or Boeing have provided a cost estimate or timeline for development of the upper stage, which may take 5 years and cost perhaps $10 billion based upon past projects.