While we don't have a released time for the launch, the road closure and Temporary Flight Restriction (TFR) run from 8:00 AM to 5:00 PM CST and SpaceX has announced they'll be starting a webcast or stream video "a few minutes before the test."  You can watch on YouTube or on the SpaceX Starship site and get more details about the mission and their coverage.  If they don't make it tomorrow, there are backup opportunities the next two days.

Earlier today, they ran a wet dress rehearsal, similar to what they do on a Falcon 9 a day or two before lift off. Tanks are filled with liquid methane and oxygen, pumps turned on, engines pre-chilled, pre-burners tested; in other words, everything short of firing the engines.  Then the vehicle was de-tanked and made safe.  Ready for the big step. 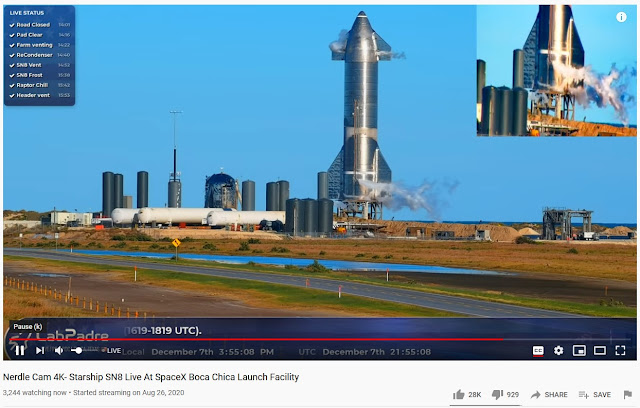 Screen capture while replaying the test; the time along the bottom is the recorded time at this point in the test, when the vehicle is venting gases from multiple places.

This is a test of a complex piece of hardware. They've built up to this point slowly and methodically, failing and improving all along the way.  Last Friday (as best I recall) SN8 was fitted with explosive charges to destroy the vehicle in flight should it get too far off course.  SpaceX has a pretty good few paragraphs on the webpage with their video link.


As early as Tuesday, December 8, the SpaceX team will make the first attempt of a high-altitude suborbital flight test of Starship serial number 8 (SN8) from our site in Cameron County, Texas. The schedule is dynamic and likely to change, as is the case with all development testing.

This suborbital flight is designed to test a number of objectives, from how the vehicle’s three Raptor engines perform to the overall aerodynamic entry capabilities of the vehicle (including its body flaps) to how the vehicle manages propellant transition. SN8 will also attempt to perform a landing flip maneuver, which would be a first for a vehicle of this size.

With a test such as this, success is not measured by completion of specific objectives but rather how much we can learn, which will inform and improve the probability of success in the future as SpaceX rapidly advances development of Starship.

They go on to say that between serial numbers SN5 and SN6, their hops and other tests, they've accumulated over 16,000 seconds - almost 4-1/2 hours - of run time during 330 ground engine starts, including multiple Starship static fires and four flight tests of the reusable methalox full-flow staged combustion Raptor engine. Additionally, with production accelerating and fidelity increasing, SpaceX has built 10 Starship prototypes.  Numbers 9 through 16 are in various stages of assembly there at Boca Chica.  The first Superheavy booster is being built up there as well.

Elon Musk flew into Brownsville yesterday, and tweeted he was out on the pad this afternoon.  That automatically makes the big test look closer.  As a comment by reader Homesteader said on Friday, this feels like being on the dunes at Kitty Hawk when the Wright Brothers came.