Student Debt Cancellation - Is This The Worst Policy Idea in History?

Since the first rumblings of the potential Biden administration, the idea of "forgiving" student loans has gotten talked about a lot; whether from Elizabeth Warren or AOC, we keep hearing "progressives" clamoring for the handout.  Clearly the loans can't be forgiven; money is owed to some bank, (which is to say some one) and the Feds can't wave their hands and make the banks take that loss, so that will mean taking money from some taxpayers to pay other taxpayers.  It takes a study from someone relatively neutral to show just how fair that is.

The top 20% of income earners will get $192 billion in tax money; the bottom 20% will get $29 billion.  The richest income earners will get over 6-1/2 times the money as the bottom 20%.  Since the lowest quintile of income earners pays almost no tax and gets more in benefits than they pay, they are essentially getting a bigger tax break.  The middle class and higher will pay for this program.  Our tax system is highly progressive, meaning the more one earns the more tax they pay.  The last numbers I can find having blogged about (using 2016 data) is that:
This idea is a highly regressive tax policy in that the richer they are, the more tax payout they get.  The reason for the massive "payout to the rich" is pretty simple.  The concept of student debt is deceptive; it implies that the amount of debt is somehow evenly distributed.  That's beyond wrong, it's insanely simple-minded.  The average student debt for an associates degree holder from a state community college is tiny, the average debt for a state college bachelor's degree is a fraction of that from a private college, while the biggest piles of debt of all are held by graduate and professional degree holders.  While some graduate degrees don't gather enormous paychecks, Medical Doctors, Osteopaths, Lawyers and plenty of others gather pretty good pay.  If they didn't get that advanced degree, it's likely they wouldn't be in the top quintile.  Dollar wise, cancelling student debt is primarily going toward cancelling the debt in highest income quintile.

This study was from the University of Chicago (pdf) so not a conservative bastion, and studies from other dedicated liberal groups, like the Urban Institute, reach the same conclusion. 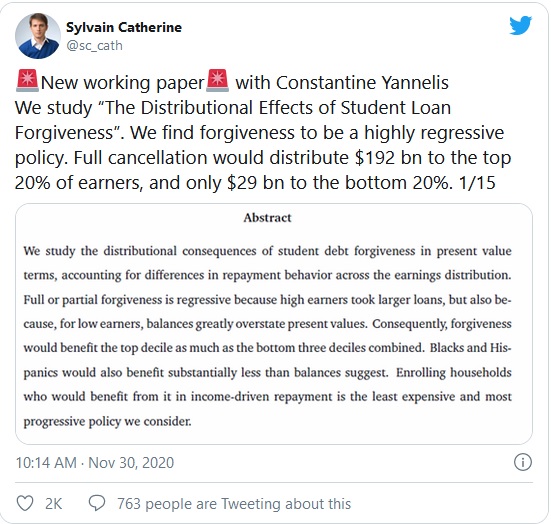 Lots of things about this idea have bothered me from the start.  The first problem I have is how unfair it is to so many people.  Think of the people who paid off their loans.  They took out a loan to pay for their college, paid it back, and now they're going to pay off the loans of people who didn't pay theirs off.  Or parents who paid for the kids' college with bank loans and will pay off other people's loans.  What about the people who thought the return on investment for a four year degree wasn't worth the expense and then went to a trade school.  Let's say they're welders making close to six figures.  Now they'll have the privilege of paying for someone else's Master's degree in "Feminist Poetry, 1912 to 1918" who's working as a barista at Starbuck's.

Without exception, if you played by the rules, played it smart, managed your finances, and lived prudently, you're a sucker.  A chump.  You avoided student loans, or went through school with minimal loans?  Congratulations - you get to pay for those who didn't.  This is guaranteed to create enormous amounts of resentment.

The second thing is that the root cause for the problem is federal government itself.  There are only so many seats for so many butts in all the colleges in America.  Demand for the seats exceeds supply, leading to the prices wanting to go up, but with student loans the price increases don't reduce demand.  The colleges raise fees to whatever they want knowing that the free market is prohibited there.  No matter how much it costs, the feds will back the loans so that they can fill all those seats.  It has been said before that if you really want to solve these problems, stop giving unlimited student loans.

This is quite possibly the worst idea for public policy in history, although the competition for that award is pretty intense.  It's so close to the Free College idea it's hard to tell them apart, but it's retroactive free college.  It's completely opposite the real way to reduce student debt, if indeed that's the purpose.