The SN8 Test Flight Was Worth Waiting For

The long awaited and frequently talked about test flight of Starship Prototype Serial Number 8 took place at 4:45 PM CST, after a countdown that went into a long hold at T-2:06 earlier in the day.  They analyzed their data and decided to launch anyway.

With no feedback from SpaceX, the flight had a lot of events that seemed like problems but could have been planned.  Elon Musk's tweets in the aftermath of the flight make them appear to be planned.  One Raptor engine shut down at 1 minute 45 into flight & the second at 3:15 into flight. One talking head/commenter speculated that this was done deliberately to lower the thrust to weight ratio and keep the vehicle from accelerating too quickly.  It could also be used to judge how well the control systems adapted to loss of two engines. Yes, the vehicle slammed down during the attempt to flip upright and land on its legs.  Elon always said the chance of getting everything right was about 1 in 3. 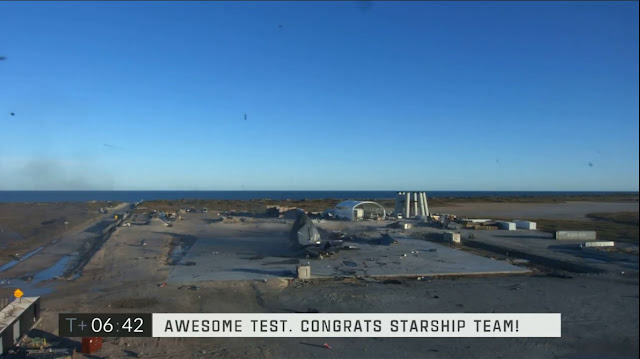 That's the wreckage of SN8 after its RUD (Rapid Unplanned Disassembly).  In the hour or so after the test, Elon tweeted (oldest to most recent from top to bottom):

Fuel header tank pressure was low during landing burn, causing touchdown velocity to be high & RUD, but we got all the data we needed! Congrats SpaceX team hell yeah!!

SN8 did great! Even reaching apogee would’ve been great, so controlling all way to putting the crater in the right spot was epic!!

On the left edge of that screen capture image, you can see some dark smoke wafting away from the wreckage.  It was still burning an hour and a half later at 7:15 PM EST when I sat down to compose this, but has seemingly burned out now, another half hour later.

Meanwhile I'll leave you with this: the entire test flight.  Don't rewind this to the beginning. It starts at T-1:00 minute or 1:47:11 into the entire video.


I bet that SN9 will go to the test pad No Later Than Friday, and will progress through its tests faster than SN8.