SpaceX Boca Chica had arranged road closures alongside the test pad for a series of tests this week, with closures Monday through Wednesday.  After the tests Monday and Tuesday, today's road closure was cancelled.  That indicates the tests probably went as expected and they're ready for more testing after the holiday weekend. You'll recall that back on December 13th, Serial Number 9 was standing in the high bay building when its support structure collapsed, causing the prototype to lean into a corner of the high bay, damaging its aero surfaces and earning the name Eileen.  Last week, on the 22nd, after replacing the damaged flap, Eileen was loaded onto a transporter and rolled to the test pad, where Bluto the giant crane lifted the ~165 foot tall, 200,000 pound spaceship onto the test stand.

Honestly, it's remarkable to be able to repair a rocket subjected to loads it wasn't designed for.  If you're keeping track, record this as a minor miracle.

Tuesday's tests focused on cryogenic tests.  The exterior of Starship SN9 began to develop a coating of frost after SpaceX started loading its oxygen and methane tanks with liquid nitrogen around 2:30 pm CST. While used similarly to verify structural integrity like an ambient pressure test, a ‘cryo proof’ adds the challenge of thermal stresses to ensure that Starship can safely load, hold, and offload supercold liquids.  Observers reported not seeing evidence of frost at the small header tank in Starship's nose.  Since the last second troubles in SN8's flight was insufficient pressure in that tank, that raises questions of why it didn't appear to be tested.

It leaves us in an interesting place.


According to NASASpaceflight’s managing editor, if Monday and Tuesday’s ambient and cryo proof tests were as uneventful and successful as they seemed, SpaceX may move directly on to triple-Raptor static fire preparations. In a first, Starship SN9 was transported to the launch pad last week with two of three central Raptor engines already installed and had that missing third engine installed within a few days of arrival. SN9 is also the first Starship to attempt its first proof tests with any Raptor – let alone three – installed.

If SpaceX does move directly from cryo proof testing to a three-engine static fire, that will mark another first for the Starship program and signal growing confidence and a desire for speedier preflight tests – both of which will help accelerate flight testing. As of now, SpaceX has yet to cancel a road closure scheduled on Wednesday, December 30th [Note: clearly written before this morning when today's closure was cancelled - SiG] but it’s far more likely that a trio of 8 am to 5 pm CST closures requested on January 4th, 5th, and 6th will host Starship SN9’s first static fire attempt(s). According to NASA Spaceflight (.com), Starship SN9 is expected to attempt a 12.5 km (~7.8 mi) launch similar or identical to SN8’s as early as a few days after that static fire. Stay tuned for updates! 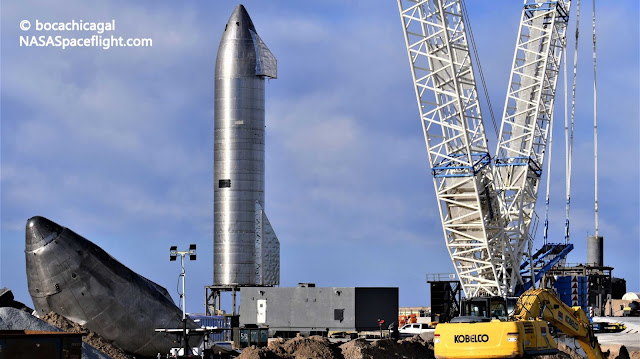 Another great photo from Mary, @bocachicagal.  On the left is the remains of SN8's nosecone, middle shows Eileen and Bluto the crane on the right.

In slight contrast to the quoted text above, they don't mention the Wet Dress Rehearsal test in which every step of a countdown down to liftoff is carried out except for lighting the main engines.  I expect to see that at some point next week.  I'm not so sure about a static firing, but wouldn't be terribly surprised to see them do one.  If they clear those hurdles, the hop to 12.5km could be the following week.