We're now four weeks out from election day.  It's early in the evening but within a few hours after I post this, people four weeks ago would have concluded Trump had won, and gone to bed.  That's when the industrial scale cheating started.  I won't go into all the reported incidents of fraud, and so many aspects that are statistically, and even physically impossible, because they've been covered in so many places.  There is so much evidence of fraud here that only those deliberately not looking at it could dismiss it.  I've heard several people say that we send observers to monitor the elections in other countries and they wouldn't approve this one.

It looks to me like the first big problem is there are tens of thousands of pages of evidence, hundreds of lawyers to deliver them, dozens of expert witnesses, a case that would take a month to do justice in court and a deadline that has to be proven in a week.  The second big problem we have is that the government officials that would be the defendants in those cases have proven that they won't listen to a judge's orders and I'd be less than surprised if people told to preserve evidence were actively destroying it as I type.  A large number of judges and elected officials are perfectly happy with the fraud.  They don't want those pesky American citizens interfering with the election.

Let's start with one thing that got me thinking this way.  Has everyone heard the report from General McInerney, a former very high ranking officer in the pentagon, saying that the stories about Dominion servers being captured in Germany are true?  That was an operation by US Army special forces against a data center run by the CIA.  Gen. McInerney says he hasn't gotten confirmation but has heard that some of the Army operators were killed.  Start out at the 40 minute mark in the video at NC Renegade.  This is the US Government fighting the US Government – on foreign soil, no less.  Where are those Dominion servers now?  Army intelligence?  When does that information get added to the court cases?
The question I keep coming back to is where do we go from here?  What now?  If it's really the will of the people, and I can see Biden was fairly elected, I can accept that.  It looks to me like the chances of that being the case are about like picking a specific grain of sand out of the Sahara.  Zip.  Zero.  You’re not going to convince me (without lots of numbers checked in dozens of ways) that a clearly scatter-brained geezer who hardly came out of his basement, and got tiny numbers of people at rallies (14?) got more votes than Obama did in '08.

If cheating this obvious (and sloppy) doesn't get fixed this time, the cheating will be worse next time.  There are no more fair and free elections, unless the whole system, nationwide, coast to coast, gets torn down and reasonable voter ID laws are put in place.  The first problem is that these are up to the states to regulate and not the fed.gov.  The second problem is half the country wants it this way, as long as they get their preferred rulers. Add in that the professional apparatchiks in various government agencies (aka "the Deep State") desperately don’t anyone who might reduce the size of the Fed.gov, and we’re saying the Republic is dead. It was a nice experiment while it lasted but it didn’t work, so back to tyranny?

In Pennsylvania, they had a state judge tell the election supervisors to allow free access by Republican observers.  The election supervisors told the court to shove it. Then we had a Supreme Court justice tell them to clean up their act and they told him to shove it. We’ve constructed a society where lawyers decide everything, and if nobody obeys the judges, then what happens? I can see some state police trying to enforce what the judge and justice said, fighting other police who are trying to prevent the enforcement.  Just like the Army vs. the CIA.

David DeGerolamo at NC Renegade puts it like this:


There are many questions that are currently unanswered but there is one fact: if military personnel were killed by the CIA, the civil war between the people and the Deep State has started. 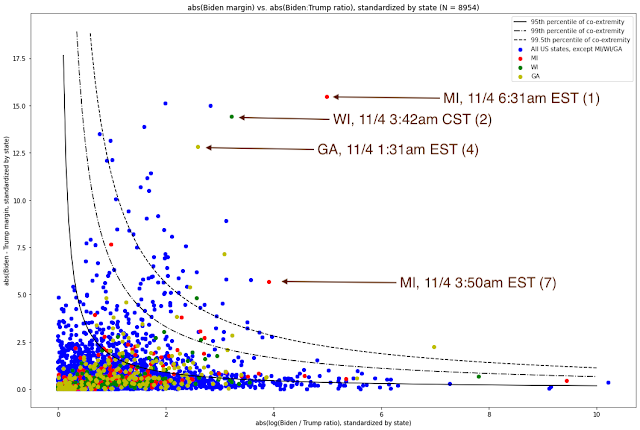 Wanna get your stat geek on?  This image show that Biden won by four of the most extreme vote ratios in the entire country. From this page (H/T to Mark Steyn)