We've been trying to keep an eye on startup Astra in the San Francisco Bay area for a while, and note that this week their Rocket 3.2 launched from Kodiak in Alaska and easily made it into space, but its final velocity was just a little short of the velocity required to attain orbit. From the company's blog entry on the mission:

Rocket 3.2 lifted off from the Alaskan coast on December 15th at 12:55 pm PT followed by more than two minutes of a successful first stage flight. A few seconds later, we completed a nominal stage separation and ignition of the upper stage, and blasted past the Kármán line, the border between Earth’s atmosphere and outer space. Almost seven minutes later, traveling over 16,000 miles per hour (Mach 21), Astra’s upper stage engine shut down nominally after depleting all of its fuel. Rocket 3.2 precisely achieved its target altitude of 380 kilometers at 7.2 km/sec… just short of orbital velocity of 7.68 km/sec.


This is the first time Astra has made it into space, even if it couldn't achieve orbit.  Their previous attempt, Rocket 3.1 failed on ascent last September.  In a video of the launch you can see the first stage fail after about 30 seconds, and then the vehicle starts tumbling.  It falls back to the ground and explodes on impact.  In contrast, reviewing this weeks' flight data they say that small tweaks to the fuel/oxidizer ratio are all it will take to achieve orbital velocity.

Where Astra seems to fit into the launch ecosystem is the very bottom end.  Their booster is less powerful than the Rocket Lab Electron, which currently seems to be among the leaders in the small launch business, if not the actual leader.  The Rocket 3.2 is 11-1/2 meters tall, not even 38'.  The electron is 18 m or 59 feet tall.  A Falcon 9 is a much larger rocket at 229.6 feet tall. 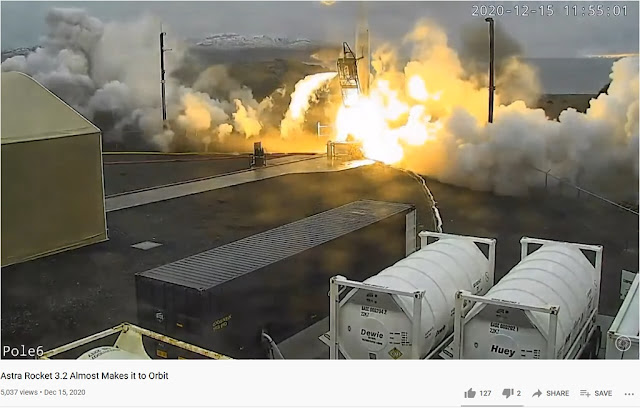 Liftoff from LP-3B in Alaska, from this video.

Still, we have to tip the hat to Astra.  As Elon Musk said, "orbit is hard."  Many try, nobody seems to make it without some pain.  According to that blog post, linked above, they have as many as 100 satellites contracted to be delivered to orbit and plan to start doing that soon.