I've been trying to troubleshoot why my Webster Internal Combustion Engine won't start since Sunday and still no joy.  You know the old adage about four stroke engines: we need Suck-Squeeze-Bang-Blow, with fuel and spark at the proper times.  "All I gotta do" is verify I get all of those at the proper time and in the proper amounts.  This week hasn't been "one step forward two steps back;" it has just been the steps back.

One of the tests I've done is to see if I get compression at the top of the piston stroke.  The prints say, "Rotating the flywheel counter-clockwise should produce a "snorting" sound through the carburetor as the intake valve lifts."  I can hear something, but I'm not sure it's at the right time.  I took off the intake/exhaust valve stack and if I put my finger over the combustion chamber port, it blows enough air to make snort/squeak around my finger on the compression (squeeze) stroke.  The way fuel and air feed into the engine is that during the suck stroke, the piston pulling back creates a partial vacuum, which opens the intake valve and that air flowing in creates the fuel flow in.  I've never seen the valve move while I'm cycling the engine.  That probably means the valve doesn't need to move to let air in.  It's not sealed and the air just blows in around the valve without it moving.

Time to take that valve stack apart.  I started experimenting with adding a gasket between that block and the engine and I noticed something funny.  I had disconnected the fuel line from the carburetor and stood the tank up so that the tubes were sticking upward out of the top. I noticed that a metal weight that came on the fuel line was no longer in the fuel line, but just lying on the bottom.  It came out?  That's really in the "that's funny" category.

I didn't round up a glass bottle to pour the Coleman fuel into until about lunchtime today, and when I went to take off the top to pour out the fuel, found the plastics inside the bottle had come apart. Badly. 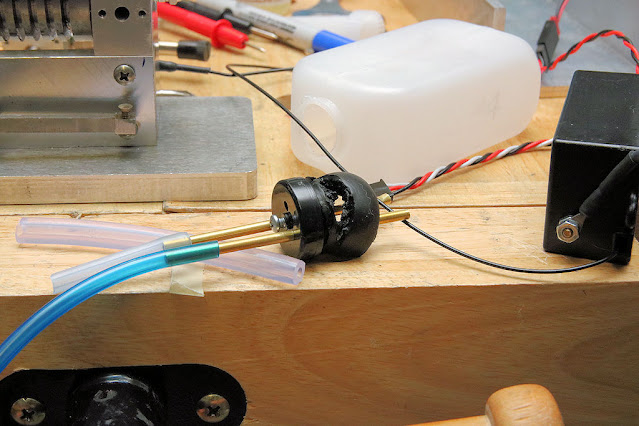 That black plastic thing, now in two pieces was used to seal the bottle by tightening that Phillips screw in the lid.  That's sure not going to work again.  The light blue fuel line on the brass tube and the much larger diameter light blue tube underneath and behind it were one piece when I got it. That tubing swelled in size until the metal piece fell out. I suppose if I had left it lying on its side much longer, it would have started leaking.

Obviously these plastics aren't compatible with the Coleman fuel!  I boneheaded the task and didn't check to make sure this tank was compatible with it.  The tank is fine, it's the rubber stopper and the fuel line that need to be replaced.  Just as obviously, I'm without a gas tank for now.  I've found some things that are compatible, but with Christmas shipping bottlenecks, I'll be lucky to have them by New Years.  I'll continue to work on the valves, I just have no way to test the engine until I get a gas tank.


While I'm here, for fellow watchers of the Starship work over in Texas, the last thing I posted was the next road closures were the Monday after Christmas, 12/28 through 12/30.  Sometime last night they added this coming Monday, 12/21 through 12/23, all are 8AM to 5:30PM.  They don't really say what those closures are for, but we might see Eileen move sooner than the last update.