A Hectic Day Leads to a Mixed Up Post

Hectic?  In what way?  You ask.  Some of it was sitting and watching activities on the attempt to launch Starship SN8 that was aborted automatically as the engines were coming up to thrust.  Some of it was centered on one of those phrases I'm sure all of us have heard but not all have had problems with:  Medicare Open Enrollment.  It's that time of year when you can change other plans you have, dropping or adding as you wish.  Some of it was Christmas decorating and keeping on top of things in the house..

There has been no official description of what the problem at engine startup was, but since it was 4:35 PM with the window officially closing at 5:00, they stood down for the day quickly.  There's a repeat of the TFR and road closure tomorrow as well, so depending on what they find was the problem, this could launch tomorrow.  Or not.  These engines have been static fired, so we know they started at least once!

A surprise today was that NASA flew one of their WB-57 aircraft down to around the launch site, a reconnaissance jet often used to capture aerial photos and videos of spacecraft tests.  No one had mentioned that possibility in any of my reading leading up to today.  Chances are this is a part of the $135 million Starship Moon lander contract awarded by NASA in April.  NASA has positioned itself to benefit from SpaceX’s success and leverage the company’s extensive internal investments.  A few hours of flight like this is probably not a big expense.

The Medicare Open Enrollment story is more annoying than anything.  The company I retired from, doesn't exist anymore.  Two or three years ago, they were bought by a bigger fish in the sea, and last year merged with another to create an even bigger fish.  Rather than going to the HR department, I have to go to a company they contract with to manage the relationships between retirees and the various insurance companies.  Something I did in early November triggered them to assign someone to call me this evening at 7:15 local.  Meanwhile something else triggered them to cancel the call - without letting me know.   No phone call as I sat here waiting.  I suppose there's a chance they'll call me at 7:15 in someone else's time zone.  Bangalore?

I haven't posted this picture or done much to follow up to it, but that's part of the general busy-ness of the season, too. 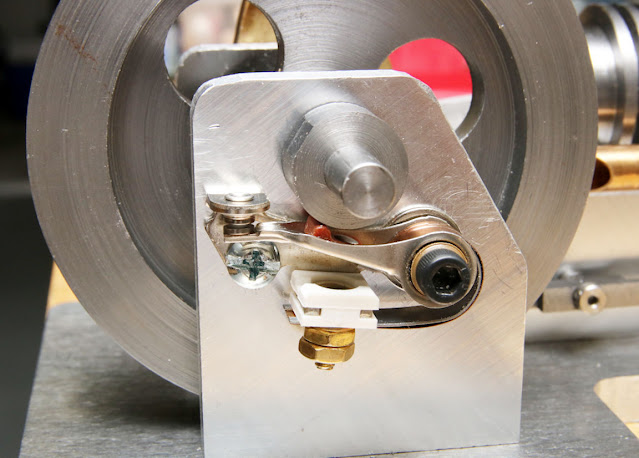 Those are the right points (reference), and have been on the engine eight days.  "All I gotta do" is get the details of assembly right to time the ignition, valves and such, wire up my electronic ignition, put some fuel in the tank and try to start it.   Yeah.  All I gotta do.