What's Up With Eileen?

Eileen, the Starship Prototype formerly known as SN9, went for a short trip yesterday and there were road closures scheduled for tomorrow and Friday as backup.  It made me think that they were planning to bring Eileen down to the launch pad area and work on her there.   As of tonight, the road closures for this week have been canceled and the only mention of a road closure is December 28 and 29. At this point, it looks like Eileen isn't moving until then.

When we last left Eileen, we gave her that name because the stand she was mounted to in the high bay building collapsed and she fell over into the front corner of the building.  Both of the small control surfaces on that side of the ship (I'd call it the starboard side) were damaged.  The things we couldn't get clarity on were first whether Eileen was deemed repairable at all, and then if the repairs would be done in the high bay or out at the launch pad.  She was lifted straight up and held in place by Bluto the crane (sometimes called Tankzilla - I am not making this up) on Sunday.  The work yesterday was to lift Eileen, bring her outside to remove the damaged support structure she was bolted to, replace the stand in the high bay with an upgraded version, put her back into high bay and bolt her to that new and improved support.

As a side note, I really don't know what to call those aero surfaces.  They're not functionally flaps and they're the wrong size and wrong location for those.  They're too small for wings, or at least too small to provide much lift.  I've seen them called flings - combining flap and wing - but that's just being cute.  Since they do provide steering, something ailerons do, perhaps we should call them that.  I've seen one writer refer to them as Elonerons.  Whatever we call them, the big one on the aft end of the Starship seems to have been replaced already and the small one at the forward end still needs to be replaced. 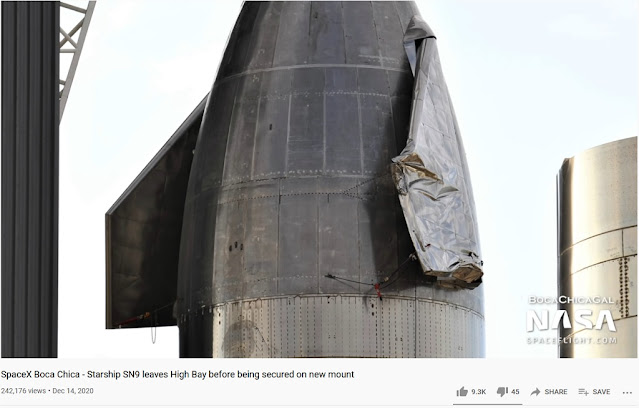 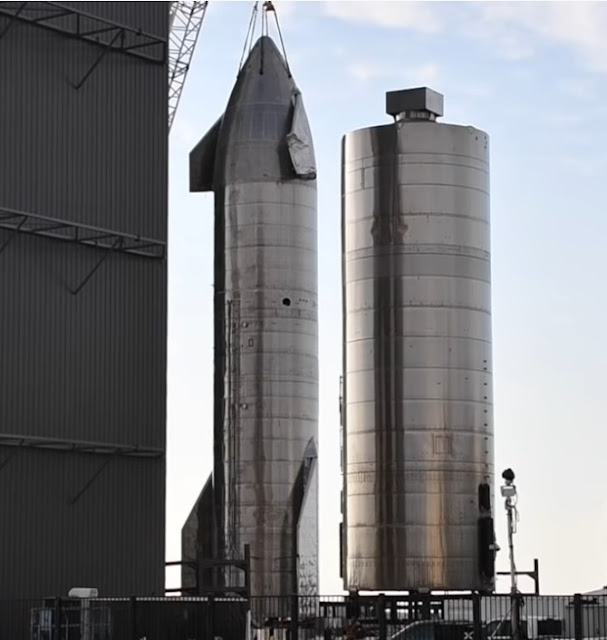 while her aft aileron on that side looks undamaged.   Both photos by Boca Chica Gal (Mary) for NASA Spaceflight (dot com).  By the way - that's SN5 or SN6 to Eileen's right and considerably closer to the camera.  I never could tell them apart.

There's still many tons of debris to clear from the pad area and based on the road closures it looks like no more hops or significant tests will occur in 2020.

Closer to home, we will watch the last Falcon 9 launch of the year  tomorrow morning, a mission for the secretive National Reconnaissance Office (NRO), dubbed NROL-108.  Liftoff will be No Earlier Than (NET) 9:00 AM EST (14:00 UTC), Thursday, December 17th.  The launch window extends until noon.  As usual, SpaceX will start a live webcast of the launch starting about 15 minutes before liftoff.  For those keeping track, this is booster B1059, last seen on the Argentine SAOCOM-1B satellite mission August 30th.  This will be B1059's fifth flight.  This marks a continuation of a trend with US government agencies, first NASA now NRO, trusting SpaceX's flight-proven boosters.  Sunday's launch of the Sirius-XM satellite marks acceptance by other industry customers as well.