Among the few latin phrases that a large number of people have heard is that one: primum non nocere, which translates as "first, do no harm." Like most quotes, it's probably not from the source most of us think it's from - in this case it's not from the Hippocratic oath, which was in Greek.  Far from strictly being a Medical Doctor's oath, which is a person to person interaction, primum non nocere applies to group interactions as well.  When you contemplate doing things with a potentially large population that might be affected by something you do, it's good to remember this.

In this case the population is the entire world, and the issue is Bill Gates is throwing his spare change into an effort to cool the earth by dimming the sun.  Gates is one of the main funders of Harvard University's Stratospheric Controlled Perturbation Experiment (SCoPEx).

According to Reuters, a Harvard University project plans to test out a controversial theory that global warming can be stopped by spraying particles into the atmosphere that would reflect the sun’s rays.

The project represents one of the most controversial aspects of what’s known as “geoengineering” — the idea that, to tackle issues like climate change, massive aspects of our ecosystem can be played with or changed. In this case, it would involve reflecting some of the sun’s rays to stop them from reaching Earth.

“Open-air research into spraying tiny, sun-reflecting particles into the stratosphere, to offset global warming, has been stalled for years by controversies – including that it could discourage needed cuts in greenhouse gas emissions,” Reuters reported.

Since every single joule of energy that the earth gets comes from the sun, and every single living thing on earth, from the simplest virus to the most complex mammals, depends on the sun for its life,  this is one area of research where the ground rules need to be the most stringent that can be applied.  It needs to be verified with no doubt in a large number of experiments and every last little thing that doesn't seem to be exactly as predicted needs to be cleared.

The article on Western Journal goes into some of the issues, but mostly from the standpoint that the objections to this project have come from people saying it will distract from getting the world to cut CO2 emissions.


There are several problems with this plan, not the least of which is that we don’t know what the unintended consequences might be. But to environmentalists, the problem is that it doesn’t solve global warming the way they want to do it.

“There is no merit in this test except to enable the next step. You can’t test the trigger of a bomb and say ‘This can’t possibly do any harm,'” said Niclas Hällström, director of the Sweden-based environmentalist think-tank WhatNext?

I don't see how something of this magnitude could be done without unintended consequences; changes to weather patterns, changes to ocean circulation patterns, changes to plant growth with the potential of mass famine, changes to the amount of Vitamin D that people make from sunlight exposure with concomitant changes to wellness in the world's populations. Further, the extent of all of these things won't be known - at best - until exhaustive tests are run.

It doesn't even have to work to cause trouble. Imagine if a country, say China (since they've expressed interest in weather control) runs some experiments that ultimately do nothing.  Two years later, the monsoons fail in India causing mass starvation and deaths.  Can you see Indians not being convinced China told the truth and starting a war over a failed experiment?  Similarly, what if the experiment works and the climate change makes someplace like China or the US' Midwest grain belt have better weather while people somewhere else have worse weather problems, even if it's not directly from the experiment.  Can you see the people with worse weather striking out against the people who they perceive made their weather worse?

In August of '19, the Daily Mail (UK) did a good summary of the story and potential problems. I've barely scratched the surface. 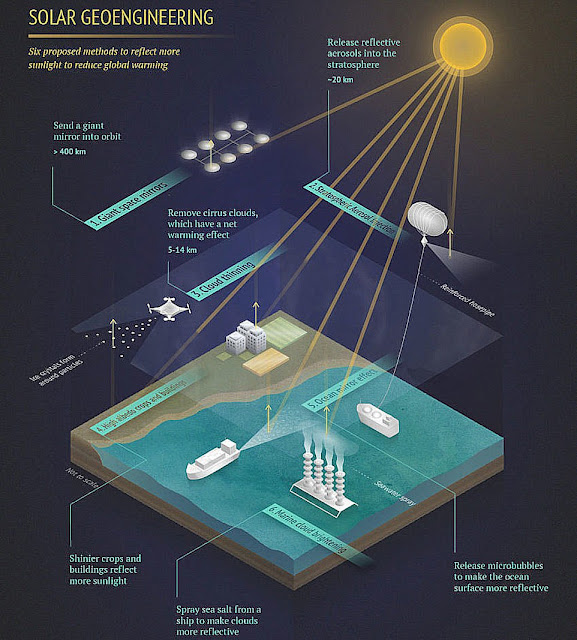 Ya know, it's awfully hard not to think of Gates as Mr. Burns in this classic clip from the Simpsons.