A Little More on the BATFE Attack on Polymer80

Hey, at least no kittens were stomped to death.  That's an improvement for the BATFE.

I regularly listen to Michael Bane's weekly podcast (currently Michael Bane TV on the Radio) and this week's final podcast of 2020, episode 50, found Michael going into the topic of the ATF going after gun parts.  He has been on this bandwagon for months and has a few "I told ya so" lines in there but it's worth it.  He also covers it in his blog and uses legal input I was unfamiliar with.


I’m thinking that the thugs at ATF are going to hang their hats on the concept of “constructive possession.” Read NFA lawyer Joshua Price’s (who I turn to for legal information on NFA issues) piece on the issue here: https://blog.princelaw.com/…/florida-man-arrested-for…/

“As I stated before, one must be very careful when entering into the NFA realm, even where an individual does not assemble the firearm into a NFA configuration because of the legal implications under the doctrine of constructive possession. Constructive Possession exists when a person knowingly has the power and intention at a given time to exercise dominion and control over an object, either directly or through others. US v. Turnbough, 1997 U.S. App. LEXIS 11886, *6. The government may establish constructive possession by demonstrating that the defendant exercised ownership, dominion or control over the premises in which the contraband is concealed.”

This would represent a huge expansion of how constructive possession has been construed. It was, I believe, originally aimed at drugs (natch) and illegal weapons possession in the sense that a forbidden person was in the presence of a firearm. ATF expanded that to include possession of the parts to complete an NFA weapon.

This goes a long way toward explaining the next phase of the war on guns.  Don't get hung up on the reference to the NFA; it's bigger than that.  The reference to the NFA is more applicable to the pistol brace front in the battles that are starting.  The reference is a court case in which ATF argued that if someone had all of the parts to make an NFA item, the only reason they had those parts was to make it.  That view was rejected in a 1992 case against Thompson/Center Arms in which the court ruled that the “rule of lenity” applied (i.e., any ambiguities in criminal statutes should be resolved in favor of the defendant).

A way of thinking about that NFA reference might be helpful.  Imagine you have no AR platform guns except a single carbine you've bought.  You decide you would really like to build an AR pistol and you buy a nice 8 inch barrel as the first part.  Totally innocent, right?  The BATFE could argue that since you have only one lower receiver, which is a rifle, the only thing you could want to do with that barrel is build the NFA short barreled rifle (SBR).  A better approach would be to get the lower receiver first.  It doesn't have to be a receiver for a pistol, as long as it isn't paired as a rifle.  (There's that odd old rule that if a receiver is considered for a rifle, you can't make it a pistol and vice versa)  Constructive possession says that if you have the 8" barrel in a storage place you rent and the carbine in a safe in your home, they're still yours so your intent is to make the NFA firearm.

Where this gets odious is the anti-gun side absolutely hates the idea of being able to put together a gun from parts.  Being able to build you own gun has been US law (and custom) for as long as the country has existed.  In the early days of gun control, more people thought buying parts to repair, or build their guns was a normal thing, and the ATF took a relatively light touch.  They defined a particular part of the gun to be the gun.  In more restrictive countries, there's no such thing as buying a part from a place like Midway or Brownells to improve your gun.  Every single part is regulated and gets the buyer the equivalent of the rectal exam they'd get for a complete gun.  The anti-gun left wants that for the US.  No 80% receivers and certainly no kits of parts to complete one prepackaged with an 80% receiver.

John Richardson over at No Lawyers - Only Guns and Money put up a leaked version of the BATFE's "Guidance on Pistol Braces" today.   It's 16 pages of legalese and John includes a summary from the Firearms Policy Coalition.  The key finding I see, because it's the kind of thing that "triggers" me is:


2) The draft document instead purports to be intended to inform the public on how brace-equipped firearms will be examined in the future. Based on the criteria set forth in the draft document, it appears that the ATF would take something of a ‘totality of the circumstances’ approach in determining whether a specific brace-equipped pistol is a ‘short-barreled’ firearm regulated under the NFA. These criteria include: the firearm’s type, caliber, weight, and length, the design of the brace itself, whether the firearm can be properly aimed when using the attachment as a brace, and whether an optic that cannot properly be used one-handed is present (i.e., something that suggests intent). The agency also indicates that it will observe the marketing of firearms and accessories, as well as other more subjective factors.

“Totality of the circumstances” reminds me of the old, “I can’t define pornography but I’ll know it when I see it” definition.  There's nothing specific, so people can never know how they will be viewed.  That allows the agency to make arbitrary rules, and sets up judges to always have the last word.  The rulemakers make it impossible for individuals to decipher what's acceptable and what isn't.  More importantly, there doesn't have to be the slightest bit of consistency in their rulings.  This is why every company that wants to market an 80% receiver has to submit them to the BATFE to get approval to sell them.  There are no objective standards.  Tyrants and other control freaks want it that way.

The "Totality of Circumstances" approach combined with constructive possession is how they can rule that a Polymer80 plastic “Mock Glock” can’t fire and isn’t a firearm, but their Buy Build Fire kit which puts the parts needed to make it work in the same box with that plastic chunk makes it a firearm. It still can't fire anything because nobody has done the machine work to transform the chunk of plastic into something those parts can be put into.  Someone less determined to stop people from working on guns could look at the same circumstances and reach the opposite conclusion.

If anything constructive possession means that if you don't buy the kit with the parts to complete it in one purchase, but buy them separately from another seller, they can still argue that there's nothing else you would do with that other than build a gun.  One step closer to getting rid of gun part sales completely.  Which would make working on your own guns a federal crime.

If anything, Michael Bane thinks it's part of a big picture attack by the big names in the anti-gun world.


One of the Left’s key goals has been not just the passage of antigun laws, but the elimination of the Gun Culture. As we have discussed at great length here and on the podcast, the “Bloomberg Model” laws adopted by so many states, including Colorado, were primarily focused on making illegal common practices within the culture, such as loaning a firearm to a friend for a hunting trip or competition, or passing guns down to children and other relatives. The laws themselves were far less consequential than their intent…making minor interactions between firearms owners harder and harder, thus weakening the bonds that weaves together what we call the Gun Culture. 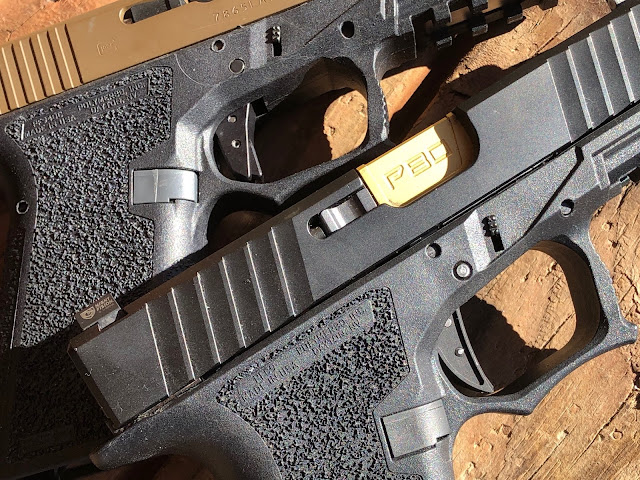