So it turns out that the year that I thought would known for optometrist jokes will be known as one of the worst years in recent memory.  I think about the only people for whom 2020 will have turned out as they hoped would be the people who rigged the election.  Their years of preparation and work to destroy election integrity came to fruition.  Can the complete collapse of the country be far behind?  Some of those same people have been working at that far longer than merely destroying elections.

In light of just how big a crapfest 2020 has been, I raise my standard argument.  There are plenty of ways to delineate time and it's only New Year's Eve 2021 on the calendar the Western world generally follows.  It's like the end of the first quarter of 5781 in the Jewish calendar.  I'm going to pretend that opening a new year's calendar really does fundamentally change things in a way that flipping a one-page-per-day calendar doesn't.  Tomorrow will be a fresh start.

2020 was my fifth year of retirement and for the second consecutive year, our planned trips were cancelled.  Thankfully the reason wasn't personal injury as it was in '19, it was the reaction to the pandemic that shut down the events we were considering going to.  One of our annual events in the area, February's Orlando Hamcation, has been cancelled, as well as one we might travel to, the Cabin Fever home machinist's show.  From my view, '21 isn't off to a good start.

Frankly, that's all the year-end review I have the stomach for.

So Happy New Year, y'all.  Let's hope for better, while we prepare for whatever may come.  Meanwhile, I'll just paste an image I got from Daily Timewaster. 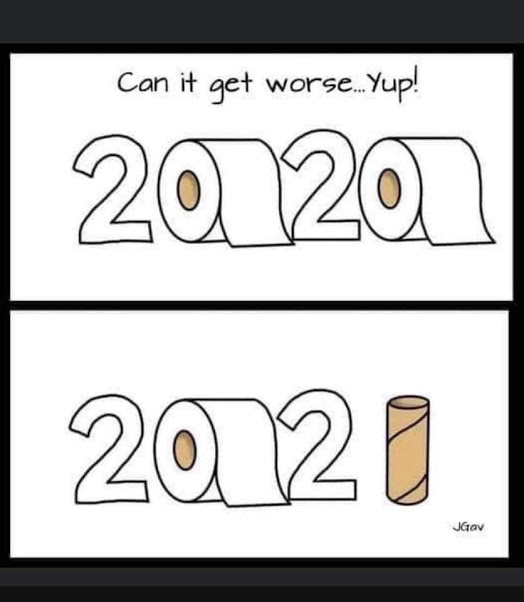