I've been watching the Lad Padre feed on and off all week. The first Temporary Flight Restriction (TFR) allowing the flight of anything from SpaceX in Boca Chica to 15 km has been approved by the FAA for as early as Monday, and word is they intend to try Monday.  Given the timing of the road closure, if I had to speculate, I'd expect them to try for the early afternoon.  I'll start watching in the morning, prepared to watch until they either announce a scrub or just don't get to it.


SpaceX’s first high-altitude Starship TFR revealed that the crucial flight test is now scheduled sometime between 8 am and 5 pm CST (14:00-23:00 UTC) on Friday, December 4th Monday December 7th, with identical backup windows available (and cleared with the FAA) on Saturday and Sunday [Edit: Unknown]. Originally scheduled as early as November 30th, the delays are less than surprising given the complexity and unprecedented nature of the flight test facing SpaceX.

Starship serial/ship number 8 (SN8) – the first functional full-height prototype – is tasked with launching from Boca Chica, Texas to an apogee of 15 kilometers (~9.5 miles) and dropping back to Earth to test an unproven approach to rocket recovery.
...
Based on several unofficial estimates, Starship SN8 is also likely to break the sound barrier on ascent, potentially putting the prototype through conditions similar to what an actual orbital launch might see at Max Q (the point of maximum aerodynamic pressure). Further adding to the daunting list of ‘firsts’, SN8’s 15 km debut will be the first Starship hop or flight with a nosecone, making it the first full-scale structural test of a nose section and the methods used to attach it to Starship’s tank section. It’s hard to exaggerate the number of things that could go wrong and the number of ways Starship SN8 could fail during its first flight.  [Edits:  see page edit below - SiG]

The Starship is powered by three Raptor engines, capable of 1.3 million pounds of thrust, and SN8 will be very lightly loaded for this mission.  That could produce an exuberant thrust to weight ratio, much more than needed.  The engines can be throttled back and I assume they wouldn't go full thrust for the entire flight.  That doesn't mean they won't go supersonic, as that last quoted paragraph says.

Remember: Musk pegged the odds of success at about 1 in 3.  That means 2 out of 3 chance that parts will be spread somewhere.

In the earliest days of the Space Shuttle program, the very first shuttle mission carried only two men: Pilot Bob Crippen and Commander John Young.  I think I recall Bob Crippen saying something like, "when they lit those solid rockets, you knew you're going somewhere."  As in you might be going on your planned flight or your last flight.  No manned flight had relied on solid rocket motors before that moment.

When they light those Raptors, number eight is going somewhere. 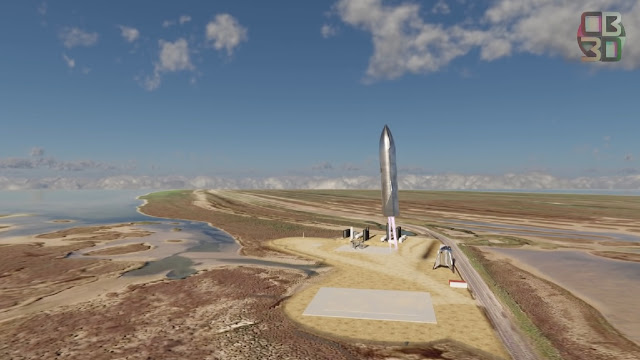 Screen capture from the C-bass Productions computer animated video, after the transition from belly flop to landing vertically.