Another Step Forward and Still Not There

This time in reference to getting my Webster running.

That's right, it's finally time to try to get the little engine I've been working on since May of '19 running.  My last update just showed off the mounting of the replacement points.  This week, I started hooking up my Capacitive Discharge Ignition system (CDI).

First, a day or so after that last post, I went to adjust timing on the engine with everything I had available to work to and found the points didn't move anymore.  The large diameter of the cam holds the points open and they only close briefly during the flat spot on the cam.  That requires the spring to close the points and it wouldn't.  I removed them and they barely would move in my hand, eliminating something about the way I mounted them.  After about a half hour of pushing on them, examining them, and agonizing over it, I put a drop of light oil around the part of the spring near the cap screw you can see in the picture. They started moving again.  It has been almost 40 years since I last worked on a car with points so my memory might not be the best, but I've never oiled points before.

With the points working, it was time to hook up the CDI. The system is designed to work on a battery pack, and the notes with the set said it ran best closest to 5V, although it would survive to 6.5.  Maybe.  My four alkaline AAs measured too close to 6.5 for comfort, so I took out one out of the string of four, replacing it with a jumper.  It's now 4.75V (or was when I started).  Once I was sure all the connections were good, I looked at the workbench and decided I had a nice way of organizing the setup; a piece of 3" wide aluminum channel that I bought to cut one 1" wide piece off. 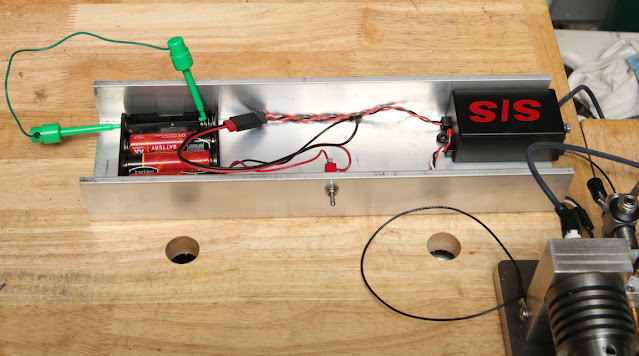 See that green jumper?  That makes a four cell battery pack into a three cell pack.  The on/off switch in the middle seemed like a good thing to add.  At bottom right, you'll see the end of the engine; the white piece is the CM6 spark plug with the spark plug wire (the heavy black wire) running back to the black plastic CDI module marked S/S.  There's a thinner black wire that's the engine ground for the ignition.  Before getting this far along, I removed the spark plug, laid the plug on the metal ground of the engine and cranked the flywheel with my electric drill to see if it sparked.  It sparked just fine.

Finally, it was time to put some fuel in the tank and try to get it to start. 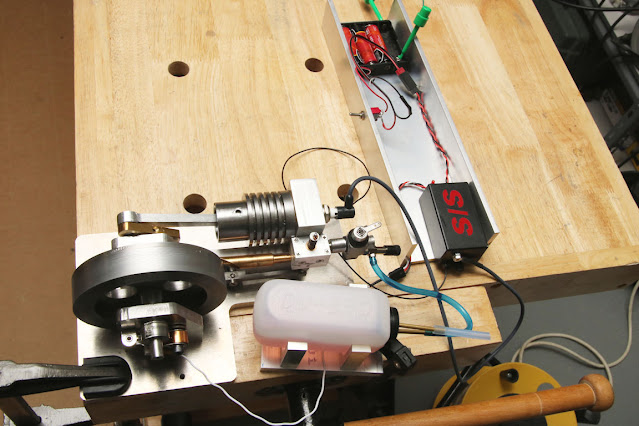 I've been expecting to have to start a lot of troubleshooting here, so here we are.  I know I messed with the carburetor, and have gotten the instructions from the maker to reset it to normal.  The next thing is to go back into the ignition timing.