My Little Engine is Pointless

I should make that, "despite my best efforts, my engine is pointless...um... pointsless?"  The engine is designed for an old-fashioned points, ignition coil and capacitor (condenser, if you must) ignition.  I decided to upgrade it to a capacitive discharge ignition (CDI) for model engines, from a guy who sells to the hobby engine makers.  At that point I had a choice between using a hall effect sensor or the points and decided to stay with points.

The plans say to use points from, "1969 DODGE CHARGER, 383, 4BL, W/SINGLE POINT DIST" but the only place where that matters is in the mounting dimensions. I could have adjusted the piece of metal that the points mount to, if I had understood that back when I was getting started (this is one of the first pieces I made for the engine).  Let's say I had a set of points from some really old car I used to have; I could have redesigned the mounting support and used those.  I eventually searched for points on AutoZone and Advance Auto Parts; the two national chains are within a block or two of each other and a couple of miles from home. I had to pay for the points at AutoZone on Saturday and have them delivered to my local store from their regional warehouse in Orlando.  I got them this afternoon and had them installed quickly, once I found the two screws I needed. 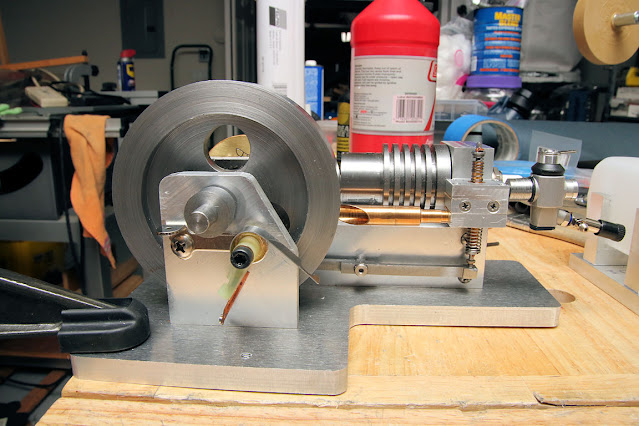 Something's missing.  These are actually the wrong points in AutoZone's cross reference.  You can see a sheet metal spring hanging off to the lower right around the black SHCS, and to the lower left of that screw is the moving contact on its plastic mount.  The plans for the engine show a bent up piece of metal on the bottom of the arm between the two mounting screws (flat blade/slot screws shown), and a stud with hardware on it (circled in red) between the screws connecting the points to the capacitor. 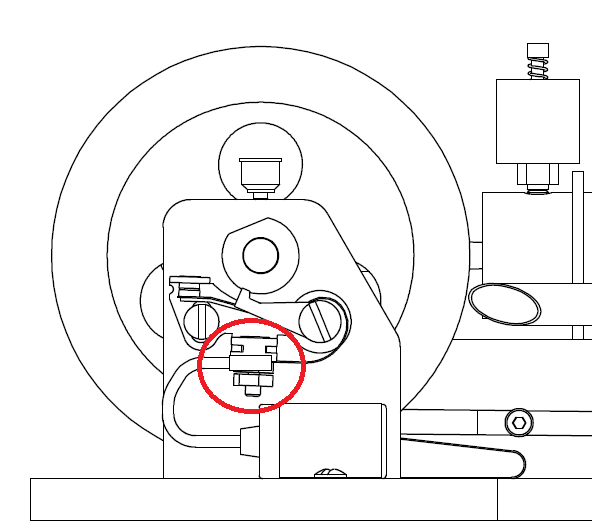 A little more research took me to their competitor, Advance Auto Parts, and they have the points I need.  Tomorrow I'll call or drop by to see if they stock them or I have to order from Orlando again.

Until I get the points, I have more stuff to do.  I need to cut a little gasket material to go between the cylinder and cylinder head.  In the last couple of days, I put together a little fuel tank holder to keep the tank in the right relationship to the carburetor input.  Hopefully. 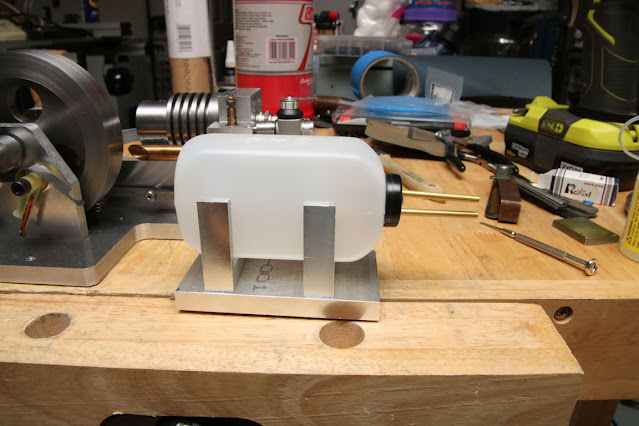 That's two U shaped aluminum uprights on a 3/8" thick aluminum plate.  The plate needs some finishing work done on it to make it look nicer.  Actually, everything could use some "prettying up," it's just too late for most of the engine.  I've seen people run these electronic ignitions spread across their workbench, and I need to take a look at making a little box for that.  I will assume attention should be paid to whether it's metal and all ground or maybe made of wood.

I have no idea how long it will take to get this running.  It took me several tries to get my flame eater to run OK, and I'm sure there's a lot here I'll need to do.  OTOH, I've bought or made everything I think I need - and I don't think another problem like the wrong points is possible.  I sure would like to have this running soon, though.