I Think It's Becoming My Annual Black Friday Post

Looking back on the phrase "Black Friday," it seems I've done a post about this unofficial national holiday every year.  I think sometimes more than once.  You might say, I'm a little curmudgeonly about the whole thing.

Back when I was a production test technician (between iterations of college) I worked for an electronics manufacturer that shipped on a quarterly system, meaning that orders were booked and the company's financial results were tracked by the quarter.  Since I was in the group doing the final system tests, by the time products got to us, every delay that could have possibly happened had pretty much all happened and things were running late.  To stretch a metaphor, they were pushing the product to get shipped so hard that if you got between the product and the shipping door you'd be crushed to death.  Our shipping department had metal garage doors tall enough to let a semi-trailer back up to the dock so we could roll things in on fork lifts or dollies.  So much product was pushed so hard through those metal doors that the morning after the last day of the quarter there were literally metallic hemorrhoids glistening in the morning sun around the frame of the garage doors.  OK, so maybe I was the only person who could see them.

When did this become a national thing?  It seems it must have been within the last five or ten years.

Black Friday was supposedly called that because it was the day where businesses turned their annual ledgers from red ink to black ink, but in the last few years it seems to have morphed into something else.  It has been reported for years that the big deals aren't necessarily really deals at all, or that some companies raise their prices in the weeks (months?) before the day so that what would have been a normal, small discount from MSRP suddenly seems like a deal.  It's being reported that more and more people are carrying their smartphone into the stores to price check things, compare price and availability at other stores, or get coupons.  I confess: I've done it and not just this time of year.

It always pays to know what going prices are.  I've heard that generally speaking, the best time for deals is closer to Christmas, especially right before Christmas.  You'll get better prices than this week, but it's a gamble.  You're betting that the stores will be stuck with something you want and would rather discount it than not sell it.  If they sell out first you lose.  If they don't sell out but still won't or can't cut the price, again you lose.  That said, it has worked out for me in the past.  It's sort of like calling a bluff in poker.

Retail is a rough way to make a living. I'm sure you've heard how airline reservation systems base the seat price on the apparent interest in a flight.  If you go back and check on the price of that seat every week, the system says there must be more demand for that flight and raises the price.  What if stores could measure real time demand and adjust the price.  Say you're looking for a new tool or other gadget; what if they see someone checking the web site regularly and interpret that as several people interested in that item and raised its price?  Would you be upset or offended?  What if they dropped the price to see at what level you can't resist pushing the Glistening, Candy-like, "BUY IT" button?  I don't have any hard evidence that anyone does that, but it seems trivial for an online store to track interest in something.  The biggest risk is scaring away customers.

Yesterday we took our traditional trip to my brother's house in South Florida, a bit short of 300 miles round trip.  It was a big get-together, with 16 people together.  Since we're not under lockdowns here in Florida, traffic seemed normal. Maybe a little light, but nothing really obvious. I have no idea what the stores will be like, but probably worse if you're in a blue state or city under lockdown. There will be no crowds and no people fighting over the one or two items that had the big discount.  An article on Breitbart shows this Black Friday scene, this morning. 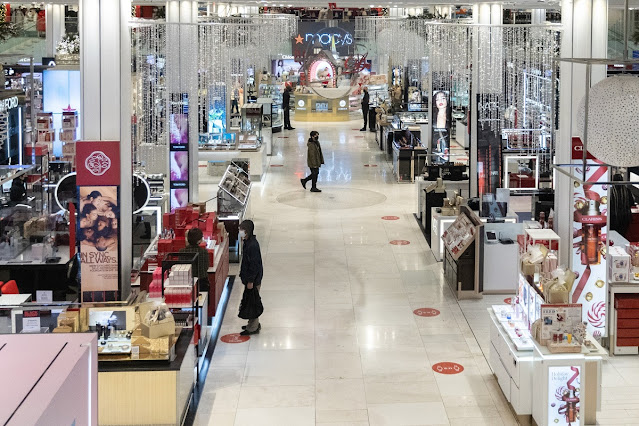