We've been covering the advancements of Rocket Lab (or one word: RocketLab) since they started picking up international headlines three years ago and have watched their success in the small payload market.  If they haven't cornered the market, they're close.  In August of '19 they announced that they were going to move toward recovering boosters and last December they conducted a test flight to take data and ensure they understood the issues.

This week they did it “for real” with a mission for paying customers and recovered the Electron booster.  Unlike the better-known SpaceX Falcon 9, the electron booster is too small, and too close to its limits on any given flight to retain fuel for a powered landing back either on land or on an autonomous drone ship.  Instead, they planned to come down under a gliding wing parachute, and get caught out of the air by a heavy lift helicopter.  Which doesn't seem to be quite how the booster in this released photo got there.  Parachute?  Yes.  Helicopter?  Must have missed the catch. 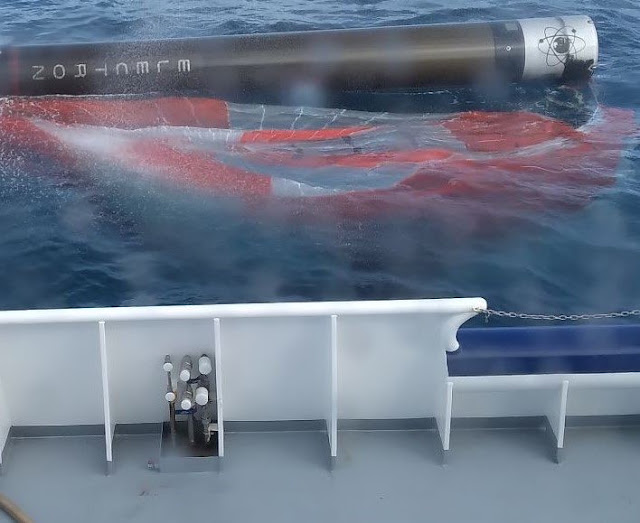 Rocket Lab ordinarily names every mission, sometimes with a cheeky reference to the mission itself.  This flight was called "Return to Sender" and the booster is doing just that.  I'm being mildly facetious myself.  Ars Technica reports Rocket Lab saying they didn't attempt the helicopter snag of the parachute this time.


Return to Sender didn't test the full process, but it was the first in which RocketLab would attempt to deploy the parachute to facilitate a gentle splashdown and recovery. This would allow the company to get detailed readings of the stresses and temperatures that the Electron experienced during reentry.

While the livestream of the mission cut out before the splashdown took place, the company released a statement indicating that the rocket had been successfully recovered and posted posted photographic evidence to its Twitter feed.

This little addition to the post seems too good not to add:


But one final bit of payload won't be remaining in orbit. RocketLab is terming it a "mass simulator," but it's a 3D-printed titanium garden gnome named Gnome Chompski, modeled on an item from the Half-Life game series. In the game, the goal was to sneak the gnome onto a rocket and send it to space. Supposedly, it was being sent to test the performance of 3D printed hardware during the rigors of launch. But in reality it was an excuse for Valve’s Gabe Newell to donate money to charity—one dollar to anyone who watched the livestream within the first day. So far, Gnome Chompski's launch has raised over $80,000 for the Paediatric Intensive Care Unit at Starship Children’s Hospital in Auckland. 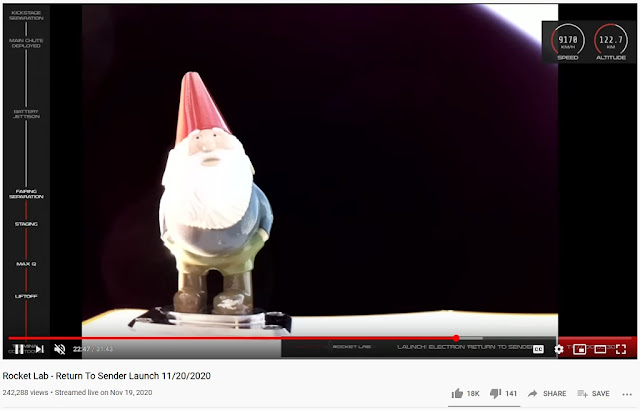