Let's talk about some fun things this time.  We can't do anything about the election recounts.  Speculating what's going to happen is no fun.  Magazines are loaded, in hope they'll just be used for practice downrange, but just in case.   My reaction to the story about a Pennsylvania court ruling Republicans can not be prohibited from observing, but then being kept out of the counting area despite the court ruling is along the lines of show up with law enforcement.  Arrest the first one and remove them from the premises, go to the next person and repeat as necessary.  Once everyone who is trying to keep them out has been removed, the problem is over.


Remember the story last March about NASA's deep space network going down for upgrades so there would be no contact with the Voyager probes until the big dish at Canberra, Australia was back?  It's the only antenna on Earth with enough gain to contact the Voyagers.


Voyager 2 has survived the time without radio contact and is doing fine.  Currently about 17.4 light hours away, so not even a light day.  It has been in space since September 5, 1977 - just passed through 43 years of its trip.  The nearest star is a bit over 4 light years away.  Back of the envelope says it will take Voyager 2 another 16 years to get to 1 light day away and 93,385 years to travel 4.3 light years.  At some point in the past, I read that the onboard power might make it to the 50 year, "Golden Anniversary" in 2027, but that 2025 was more realistic.


Let's do some launch updates and news. This inevitably involves Spacex, but I'll start with ULA (United Launch Alliance). Last night's scheduled launch of the Atlas V NROL launch that has been pending for months now was scrubbed again.  The problem was Ground Support Equipment, also again.  This time an Oxygen valve.  Spaceflight now reports that the launch has been rescheduled for tomorrow, Friday the 6th at 5:46 p.m. EST.  Looking up previous posts on the mission, I see I've inadvertently referred to this as being a Delta IV launch.  It's not.  It's an Atlas V.

I believe that was the 9th scrub of this mission, but I'm not sure of that number.

We were just treated to an excellent view of a SpaceX mission tonight at 6:25 PM, the long awaited GPS-III SV-04 (Space Vehicle 4) launch for the Space Force.  This vehicle was the one that aborted at 2 seconds in the count at the start of October, and had engines swapped out leading to the "Nail Polish" problem being found.  Night launches are always best, although the trajectory seemed to be toward the northeast which is a bad angle from my backyard.

That launch being successful probably assures the Crew-1 mission will be confirmed for the evening of the 14th, 7:49 EST.


The previous tests on Starship SN8 over in Texas have all gone successfully, but there hasn't been a static firing that I'm aware of since they added the nose section.  That hasn't stopped SpaceX from saying that they might make their first test flight as early as Monday the 9th.  This is a high risk flight, as I've talked about before, centered on a novel approach to landing that SpaceX has never done before.  Keeping the complete openness they've been engaged in throughout the life of the Starship program, SpaceX has announced they're going to live stream the test flight.  To quote from Elon Musk


Sure, although it might be quite a short livestream! Lot can go wrong, but we’ll provide video, warts & all. You will see every frame that we do.

It's kinda hard to not admire that openness.  Musk has been trying to make sure everyone is aware that once SN8 lights those three Raptor engines, a practically infinite number of things can happen and only one of them is the desired outcome.

I've been able to watch several tests, usually by coming to the room late and backing up the video on Lab Padre's cameras.  I watched the triple engine static fire back on October 19th, and watched the cryo tests over the last week.  I suspect Monday will be used in doing a static fire, possibly two, since they've requested road closures all day long.  I expect that will work because this is in their experience base.  I don't expect the launch on Monday, but it could happen later in the week. 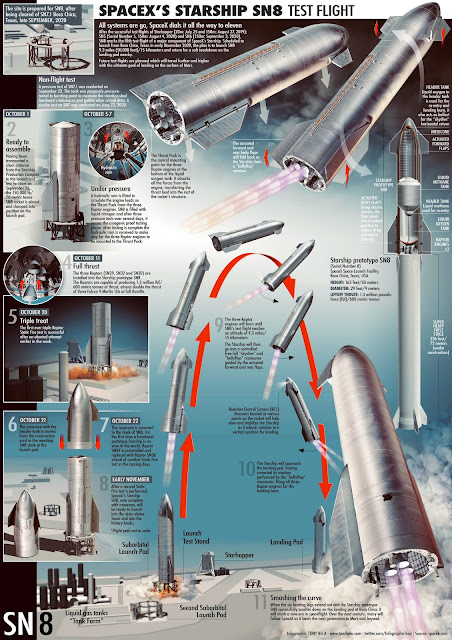 This graphic on the life of SN8 was linked by Teslarati from Twitter user Tony Bela.