ULA's Atlas V launch carrying the NROL-110 payload lifted off tonight after using almost 20 minutes of slack in the launch window.  Scheduled for several days to lift off at 5:13 PM EST, they used built-in hold opportunities to eventually launch at 5:32 PM.

The launch appeared completely nominal and was close enough to our local sunset to give a rather pretty contrail. It started out below the sun's horizon, so dark, then was illuminated by sunset colors that turned to white as the vehicle climbed out. Sunrise and sunset always give pretty launches when the weather allows.  I have to say the most surprising thing in the ULA video coverage was a short recruiting video to come work for NRO.  In my day, they were like the MIB. 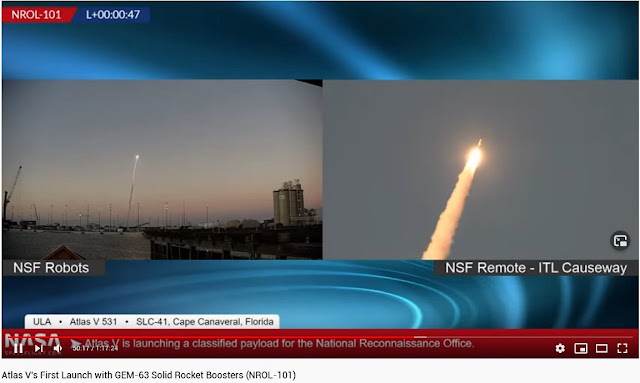 Due to the mission being classified, ULA stopped providing updates fairly early.  Apparently, the booster succeeded, but this flight has a Centaur upper stage to put the satellite in its required orbit.  It's possible they can issue a statement saying the performance of all systems was nominal or something but nothing I can find.


Things did not go nominally for the SpaceX Static Fire last night. There are some people saying the static firing lit fewer than all three Raptor engines.  What seems to be the only solid information is (as usual) in a few tweets from Elon Musk almost in real time.  Read from the bottom up. They lost control of the vehicle.  Sitting there on the test stand with a load of cryogenic propellants, especially the liquid oxygen (LOX) everyone knows the oxygen will boil as it warms and that will increase the pressure in the tank.  We've seen these tanks tested to bursting pressures before, and we've seen the tanks reduced to strips of scrap metal when the pressure exceeds the strength of the steel.  The system is designed with low-strength, burst disks in key places, so that in the event of a failure like this, the vehicle doesn't get blown apart.  An obvious analogy is the freeze plugs in your car's engine that are designed to pop when water in the engine cooling channels freezes and expands.  This is "similar in concept, different in detail."  The burst disk worked as intended.

The entire sequence happened while we were out of the house, so I didn't see this until a couple of hours later, but there was a test firing at 7:15:18 on the Lab Padre camera.  It lasted a few seconds, and then everything quieted down for another minute and 20 to 7:16:38 when something showed up as glowing red ribbon from the bottom of SN8.  It quickly became evident it was something molten when we saw the stream get lumpy; it was presumably metal. 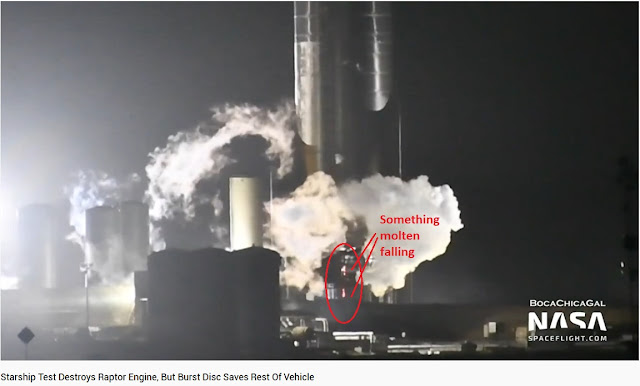 It appears that at least one engine needs to be replaced.  I peeked in at the Lab Padre Nerdle camera several times today, and saw some work being done under SN8 but it didn't look like engine change tools.

One of the more popular space channels on YouTube, Scott Manley covers this test without being too tedious.  The image clip above is from his video, using (of course) NASA Spacelight.com material.

I suppose that it's asking too much but back on October 15th, I included a picture looking up SN8's skirt, showing all three raptors and more hardware than I can name.  I'd love to see a repeat of that picture before they start replacing things.