According to a story from FEE, the Foundation for Economic Education, voters in Portland, Maine, approved a minimum wage law that could make minimum wage $18/hr almost instantly.


One of those cities was Portland, the largest city in Maine. The referendum sought to increase the minimum wage from $12 an hour to $15 by 2024. The measure also mandated that workers receive time and a half during a civil emergency (like, say, a pandemic).

Since the state of Maine has declared a state of civil emergency, as soon as next month the minimum wage could jump to $18/hr (time and a half at $12/hr).  Maine voters also voted in Rent Control, a policy so destructive to its aims that even the communist North Vietnamese called it the biggest mistake they made.  (“The Americans couldn’t destroy Hanoi, but we have destroyed our city by very low rents. We realized it was stupid and that we must change policy.”)  Even Paul Krugman acknowledges rent controls decrease the quantity and quality of rental units.  Last week, Californians rejected rent controls.  Congratulations, Maine!  That is world class stupidity.

Portland's minimum wage increase is a bit wackier than Florida's law, which raises minimum wage from $8.56 (already more than the Federal min wage) to $10 next September 30th and then increases $1/hr every September 30th until $15 is reached in 2026.  In 2027 and beyond, the raises become more randomized.  Florida's new law has no mention of mandating time and a half during an emergency.

As you expect, businesses that are already reeling from the effects of the lockdowns are trying to figure out if they can survive.


"In the last 7 months business has dropped from 30 to 50 percent and food costs have skyrocketed. This added increase on a business already depressed due to the pandemic is tough,” one Portland business owner who declined to speak on camera told WCSH, an NBC-affiliate. “We may have to either cut employee hours or cut back on business hours."

An economic paper I read on FEE a few weeks ago gave me an increased perspective on min wage laws.  I had always assumed that if a business could afford labor that was 25% of its costs, say, and labor went up by 17% (Florida's current $8.56 to $10), their prices went up to cover the cost of labor.  In this case, labor went up from 25% to 29.2% of their costs, so their prices went up to bring it back down to what they could afford.  What the FEE paper pointed out is that prices aren't always as changeable, also called elastic.  Let's say you're just inside the city limits.  Your costs suddenly go up, but the restaurant across the street and just outside the city limit doesn't have to raise their prices.  That means you're likely to lose business if you raise your prices.  What happens in this situation?  In the FEE article, they argue that labor pays for the minimum wage raise.  This can be done by forcing full time employees onto part time thereby reducing the costs of benefits, demanding employees get more done, and whole bunch of other ways.

Don't get me wrong, these laws cause all sorts of adjustments, and the people that they're supposed to be helping end up paying for everything.  If the business closes, or has to cut employees, who gets hurt the most?  The low-skilled workers, usually on minimum wage.

I've written about this topic forever because of the truism I've been saying forever.  Every time one of these min wage debates come up, we tell them they're only going to hurt the people they want to help.  Every time they pass the law anyway.  Every time our warnings are proven true.  A few years later we repeat the whole process.

Everyone neglects that right now there are a lot of people in Florida (or Portland) who went off and tried to better themselves by getting training or a certification in various things.  Anything from pet grooming to manicurists to hair braiding, to being an EMT.  Right now, they're making between the current min wage and the coming $15/hr.  Those people are going to be lumped in with everyone else.  If they're making 50% more than minimum wage now, they won't be by the time it's $15/hr.  The people who propose these laws think everyone will get a raise.  It doesn't; it can't work that way.  The people behind the laws have disincentivized people improving their skills to improve their lot in life.  Now imagine how those people are going to think of the time and effort spent getting training - maybe going to school at night while working. Why bother? 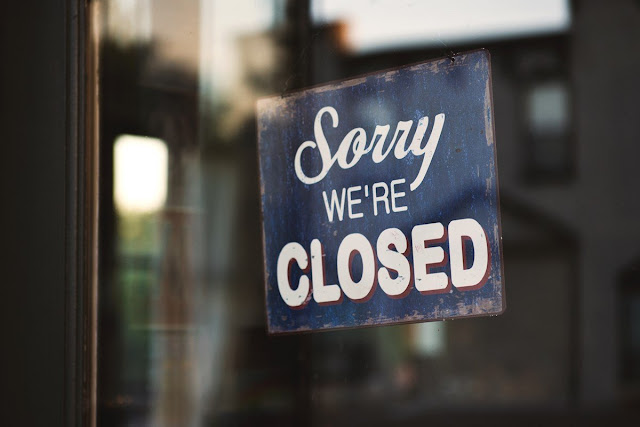 Of course, a lot of businesses simply won't be able to make it and will hang out one of these signs for good.  Image credit: Pexels from the FEE article.

This is going to fuck up Florida so bad I can't imagine.  Portland, too, but I've never been there and have run out of fucks to give.