Back to Normal at SpaceX Boca Chica

It was back on Friday the 13th that I posted an update on SpaceX's testing program at Boca Chica, after a meltdown during the static engine firing test on the preceding Tuesday.  After ten days without any road closures or other tests scheduled, yesterday they announced road closure for tomorrow, 11/23, from 7a-6p CST, 1300-0000 UTC, with Tuesday and Wednesday as backups.  Expect more cryogenic proof testing and another static fire test, possibly more than one.

The bigger news from them is the long anticipated test flight to 15 km (~50,000 feet) has been scheduled for Monday November 30th, with the same 7a-6p CST hours.  It has never had a committed launch date before.   Tuesday and Wednesday 12/1 and 12/2 are backup dates, same hours.  Elon Musk has committed to live streaming this launch saying it might be really ugly but we'll see it in real time the same time he does.

Let's see... the SN8 meltdown was Tuesday the 10th; the Do Over is Monday the 23rd.  Considering the talk about redesign of the Starship and changes to the launch facilities, a delay of less than two weeks seems astounding. 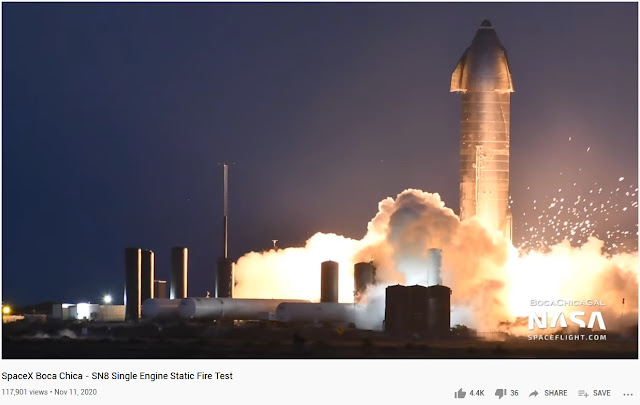 View of the "flying sparklies" from the night of Tuesday the 10th, from the NASA Spaceflight (.com) video posted Wednesday the 11th.

Meanwhile, here within viewing distance of the Kennedy Space Center/Cape Canaveral Space Force Station, we're counting down to the 9:56 PM launch of another Starlink mission (Starlink-15).  Yesterday's Falcon 9 launch from Vandenburg Air Force Base set a record for launches by SpaceX in one year at 22.  This makes tonight's launch doubly special; in addition to setting a new record for number of launches in a year (and any more launches will do the same) it will be the seventh launch of booster B1049.  That will be the most launches of any reusable rocket and one more step toward their long-time goal of 10 launches 'without a major refurbishment.'

With tonight's launch #23, SpaceX is looking towards a year of 25 launches (possibly more - Spaceflight Now has four launches before the end of the year)), but a couple of times, CEO Elon Musk has revealed that the company is pushing to achieve as many as 48 launches in 2021.