As with pretty much everything about the Covid disaster, the mask stuff is hard to decipher.  It's not like people haven't been studying the effectiveness of masks against respiratory viruses for a hundred years, and pretty much concluded they don't do much.  Even though there might have been absolutely fine studies that have been guidance for that time, everything had to be treated like it was a New Thing, with studies saying masks help alternating with studies saying they don't.  Recently a study in the news that said masks worked had to be retracted by the authors.  The masks didn't actually help.

It was pretty obvious in the early days they didn't want people to have N95 masks because a shortage was happening and the professionals said they needed them more than we do (which I don't dispute). 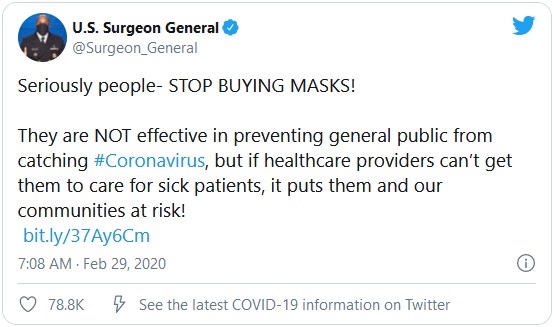 Let me pass on a saying I picked up when I was a student: one study doesn't prove anything.  Two don't either, but two are stronger than one.  Several studies might well mean something, but they all might have the same fatal flaw big mistake in their setups.  Fourteen studies might well prove something, with the caution that they may have made the same mistakes over and over again.  (The fourteen includes both hand washing and mask studies, not just masks). 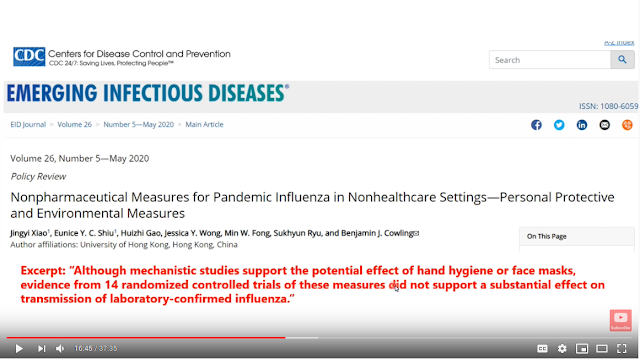 Note this doesn't say masks are totally useless, just that any benefit is indistinguishable from random differences between groups of people.  A worthwhile observation from redneck statistics is that if you have a handful of studies of something, with one pile saying there's an effect and another pile saying there isn't, it could be that there is an effect, it's just very weak.  Maybe a mask could reduce the spread of the virus by 1%; maybe the mask makes the spread worse by 1%.

Personally, I come down to thinking they are less about protecting people than the politicians saying they're doing something.  Some of them, of course, are just tyrants who want to control people regardless of whether it's helpful or not.  I think it's an undeniable observation that a lot of people aren't really adults, regardless of their age, and want to be protected by big government.  These are the people you see in video reports where they verbally and sometimes physically attack someone for not wearing a mask around them.

A politician is someone who never wants to be thought of as being wrong.  As an engineer, I wrestled with nature full time, so I'm quite used to being wrong.  I always used to tell the new grads I would mentor that I reserve the right to be wrong.  I try not to be, but that just doesn't mean much.  This might all be wrong, too.