Another Week, A Little Closer

Lately, it has seemed I can't get to the point of starting up my little engine, that it's one step forward, one step back and I'm redoing the same things over and over again.  Last week I said "tomorrow" I'd make a replacement crankshaft throw to replace the one that has been giving me problems for weeks.  The next day I thought it might make a nice accent to make it out of some brass I have, so that was a few hours.  It had to be 1/4" thick to fit where it goes, and I had some junk 1/2" thick brass I've had around for years and used to make test cuts on.  I thinned it down to 1/4" and was able to make a replacement fit in the space I had.  Because of a few factors involved with thinning the brass and proofing the CNC file, it took two afternoons to make this one. 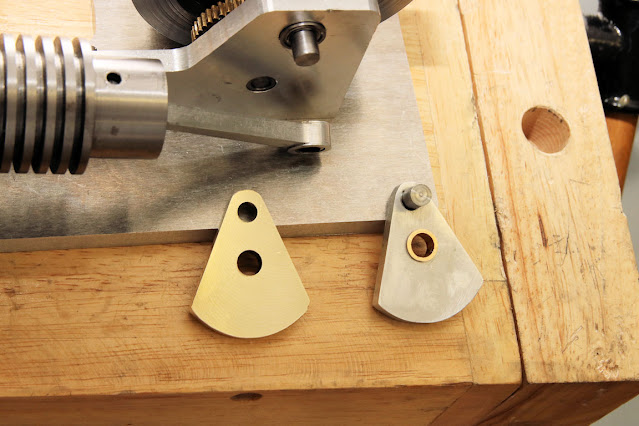 With that pin at the top moved over to the brass one and once in place on the engine it looks like this.   (BTW, I don't know why I didn't take off that piece of tape before taking the picture, but I'm not going to bother to edit it out.). 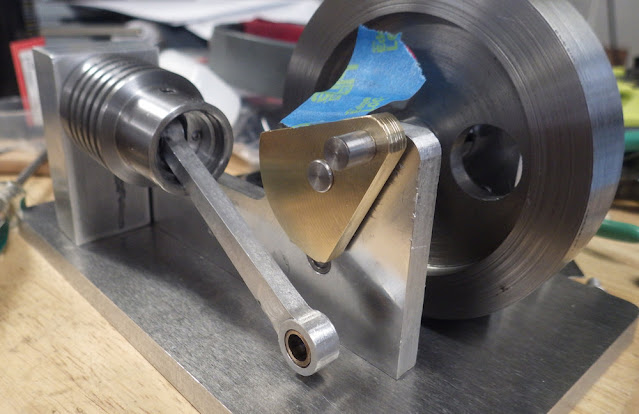 Today, it was running again (on my Ryobi drill) for another half hour.


As you can tell, while it's moving, one can tell that there's something colored differently that's spinning, but that's about all.

What's left? I need a couple of inches of fuel line from the tank to the carburetor. I need a little mount for the fuel tank; it should be around a half inch or so higher than the carb so that the fuel flows without a fuel pump. I need to get a set of points for the engine and hook up my electronic ignition.  I can get it to run with the electronic ignition spread around on the bench, but a box for it seems like a good idea.  That gives some way to move it to the next model that needs one.

How do I start it?  A lot of engine modelers make something to go on the shaft that my drill is driving in this video, so that they can use a mating attachment on the drill to crank over the engine.  At least one modeler I've spoken to got a rubber pinstripe/decal eraser like body shops use and that created enough friction to start the engine just by holding it against the flywheel.  The little oddity here is that the engine is intended to run with the flywheel turning counterclockwise viewed from the side the drill is on.  That makes the drill chuck want to come loose and the same thing will happen when it's holding a starting attachment but the rubber wheel will be spinning clockwise.