The Continuing Chronicle of the Cam, CNC and CAM

My last shop update post, a week ago, mentioned that one my next parts for my Webster engine was to be the exhaust cam.  I mentioned that the plans I'm using recommend using a method developed by a model engine designer named Hamilton Upshur, which requires building a fixture to turn the cam eccentrically.  It wouldn't work to just turn it off center with a four-jaw chuck because the cam gets rotated a bunch of times and just a little metal taken off.  This fixture is turning it off center twice.  This is interrupted cutting; it only cuts for a few degrees of rotation so the lathe has to not shake itself apart while doing this.

Last Saturday I finished the fixture: 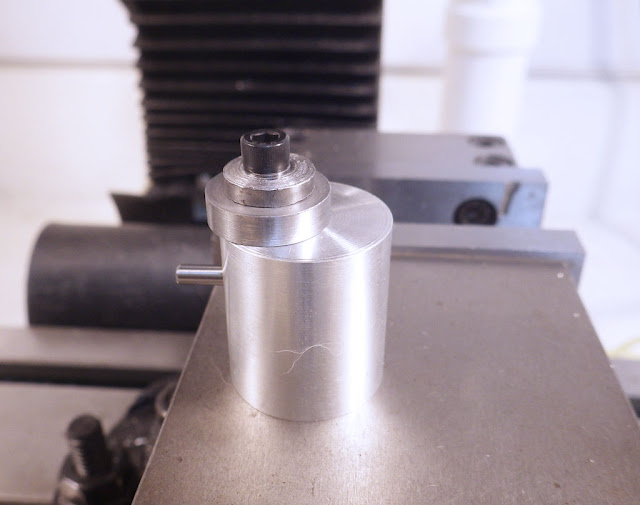 Right below the socket head cap screw is a 1/2" diameter washer.  The next thing down is the cam blank: turned on the lathe to an Outside Diameter of 0.712" and the Inside Diameter reamed to 0.375".  Lacking solid step by step directions, I realized I needed to turn this on the outer diameter until I could verify that the bottom would be the right thickness; the OD minus ID of 0.094".  I just didn't see quite how to get from that first step to a complete cam.  As a result, my cam came out with a cam-like shape (or egg-like), but any outside dimensions that matched were purely a coincidence. 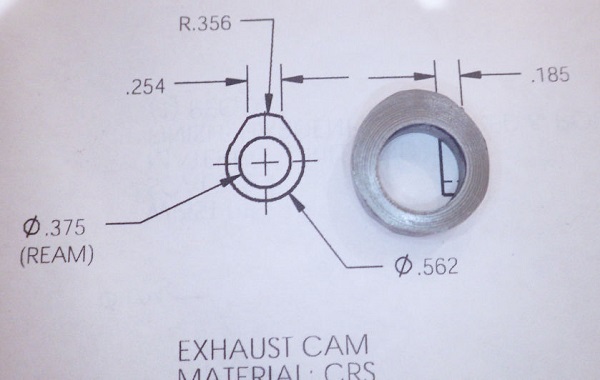 After posting my picture to the Home Model Engine Machinist forum, one of the wizards sent me a pdf he had previously posted of how to cut these.  The biggest mistake I made was starting from the center and trying to work to some lines I had scratched on the blank (coated with blue Dykem), then flipping it over and going back to the bottom center and trying to do the same thing going the other way.  The way to do this is to start at some point, and then rotate the blank 5 degrees at a time until it starts to look like a cam and then measure the top of the cam and stop when you get to the desired width.  For this cam, that's 43 steps.  For each step, I unscrew that cap screw, rotate the blank 5 degrees (where the tool is cutting, that's about .024"), tighten the screw and turn it again.  This time it came out much better. 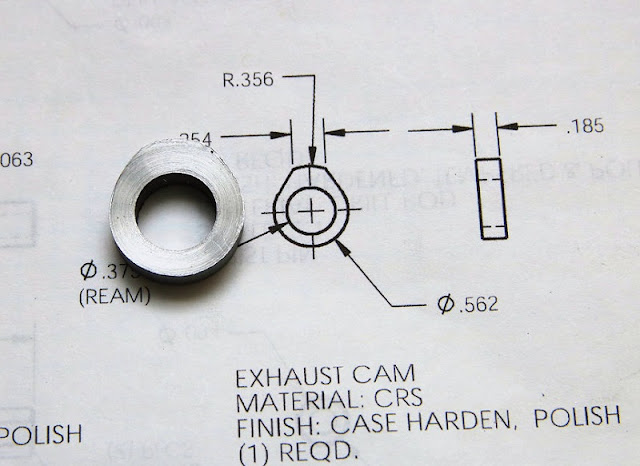 You can see it's less lumpy, and in fact better than the first in just about every measurement.  The problem is that the bottom 3/4 of the cam is too thick.  Instead of 0.094", it was 0.125".  So back to the fixture to try to resize the rest of the cam.  That failed - one time when I tightened the screw down I guess I didn't tighten it enough and it slipped.  The top section of the cam got undersized by almost 1/16".


Cam looks like a job for the cnc mill to me. Bolt the blank down to the table, through the hole, on top of a sacrificial piece of aluminum.

I was interested in doing it with this fixture for two reasons:  first, to be honest, just to do it manually (which is because) second, the guys on that forum seem to be completing their projects at least a thousand times faster than I do.  That implies CNC is holding me back.

It just seems that if CNC is holding me back, and if CNC is a strong feature of my shop (maybe the strongest) maybe I should be trying to get better at CNC programming.  So instead of using my CAM program (Computer Aided Manufacturing) to create the tool paths to make the cam, which has a simple outline, maybe I should write the program by hand. 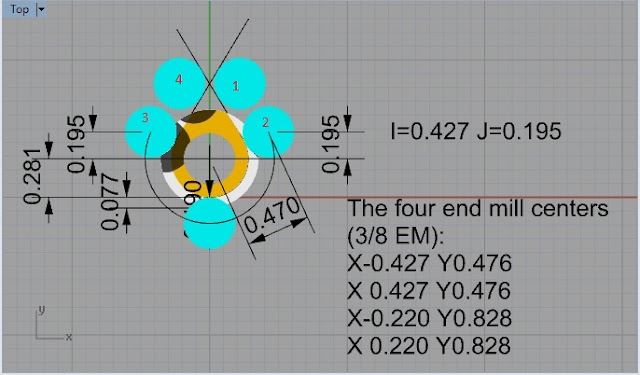 Each of the turquoise colored circles is the end profile of a 3/8" diameter end mill.  The centers of the four at the top are listed in the lower right.  The tool path is to start at number 1, move in a straight line to position 2, then do a section of a circle that takes the cutter to 3.  From there, do a straight line to 4 and then straight to 1. The gold outline is the cam drawing, and the almost white circle is the blank.   For some reason I don't understand (but that I had read could happen) the Mach3 interpreter didn't understand my code to go from 2 to 3 and almost went straight across.  After troubleshooting for a while, I thought I'd add that unnumbered position at the middle bottom, cutting the arc motion into two movements.  After that, the test cuts (air cuts) looked perfect and I cut this. I cut this in .031" thick slices, from top to bottom, making the entire file six copies of this with one modification (the first line goes .031 deeper each pass):

This file is 42 lines long because of the two G02 (cut an arc clockwise) commands.  The file my CAM program made, which is entirely small steps from one point it chose along the side of the cam the next point it chose instead of G02 statements, is over 10 times as long.

Here are all three cams with the CAD/CAM/CNC cam on the right.   This is right off the fixture with the barest amount of deburring. 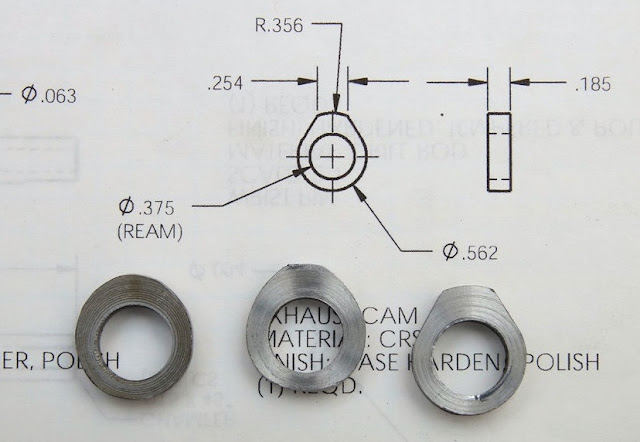 Clearly, I would have wasted less metal and been done faster if I hadn't spent a few days trying to turn it on the lathe fixture.  The question is whether or not sitting down to make the cam with CNC from the start would have gotten me done faster than if I knew how to do it with the fixture in the lathe. I think the answer is yes.

The reason why some of the wizards on the HMEM have done three engines since the first of this year and I've been working on this one for over a year is that for me, just about every part is the first of a kind and I've never made one before.  My second cam is virtually guaranteed to go faster than this one.  I don't know enough about engines to really see how this goes together so I spend too much time thinking about most parts.  If someone wants to make model engines, they'd probably be better off working on small engines and antique farm engines than learning how setup a CNC mill and lathe.