One of those questions that comes up from time to time is from someone who has heard antennas are polarized and wants to know if that matters.  The answer, as always, is that it depends.

The polarization of the radio waves from an antenna is ordinarily given as the polarization of the electric fields.  As a recap, a radio wave is an electromagnetic wave, like ordinary light but lower in energy.  In the 1800s, you may recall from reading or a class at some time, it was thought that light propagated in a medium called the Luminiferous Aether because there was ample evidence light traveled in waves and how can there be waves that aren't waves of something.  Without spending too much time here, the presence of the Aether was disproved by the Michelson-Morley experiment and then finally buried by early 20th century advances.  Long before that, Maxwell described how an electromagnetic field can propagate forward as a changing electric field created a changing magnetic field which created a changing electric field ... repeating forever.

Animation of EM wave propagation; by convention the electric field is called E while the magnetic field is B.  The important part to notice here is that both fields maintain the same orientation as they propagate.

Why do we care?  Anytime radio propagation is local or line of sight, the polarization will be maintained and various radio services have established preferences for polarization.  An antenna set for one polarization rejects the other.  The theoretical attenuation on a cross polarized signal, like a horizontally polarized signal on a vertical antenna, is infinite.  You never get truly infinite rejection because that depends on the antennas being perfectly perpendicular to each other, and very small angular differences matter.  A cheap and dirty workaround, although you lose signal compared to antennas in alignment, is to rotate one antenna 45 degrees to the vertical.  This loses 3 dB compared to perfect alignment, but is an easy workaround if you were to be unsure of how signals would arrive at your antenna, vertically or horizontally polarized.

Virtually any service that uses vehicle mounted antennas or handheld radios is based on vertically polarized signals - taxis, police, fire, emergency medical, and ham radio FM services (most popularly the 2m or 440 MHz handhelds or car mounted radios) come to mind.  I know of no exceptions.  While vertical polarization is the default on the 2m repeaters, if you drop down to 144.200 and switch over single sideband, the default there is horizontal polarization.  A few times over the years, I've heard guys just getting started on sideband using their vertical 2m FM antennas and being disappointed until they rotate the antenna.

If the propagation is ionospheric, the polarization gets "scrambled "in the ionosphere by a phenomenon called Faraday rotation.  This goes for your attempts at working the other side of the world or the guy behind the next hill by sending your signal straight up.  If you're using a vertical to work some remote island and they're using a horizontally polarized beam (or dipoles) polarization doesn't matter.

Horizontal and vertical polarization are just the basics, there are other kinds.  Circular polarization, (the general case is elliptical polarization) is a natural phenomenon - see the previous link on Faraday rotation - and is commonly used in some satellite downlinks.  Quadrafilar helix or turnstile antennas are common amateur approaches to receiving weather satellites.  The tricky part here is that there are two types of circular polarization, too: Right Hand and Left Hand Circular Polarization (RHCP and LHCP).  Those antennas reject the other polarization and I don't know of a trick like mounting the vertical or horizontal antenna at 45 degrees.

If you're interested in HF, polarization is less important than the antenna pattern you get from either a horizontal or vertical antenna.  The effect of antenna height is talked about in this post from February of 2018. 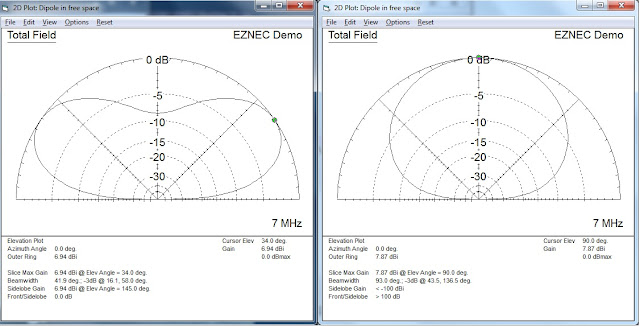 The same 40 meter dipole mounted at 66' above ground (left) and one foot above ground (right).  On the left it's a respectable pattern for long distance contacts.  On the right, it's an NVIS (Near Vertical Incidence Skywave) for local contacts.  Vertical antennas tend to have low angles of radiation, like the dipole at 66' but with even lower take off angles.