DARPA is Reviving NERVA - What?

It's a rule of writing for others to never use acronyms without explaining them.  Fully spelled out (so that it would be a two-line title) the Defense Advanced Research Projects Agency (DARPA) is opening bidding for contracts to revive the Nuclear Engines for Rocket Vehicle Applications (NERVA) program from the early days of NASA.

The basic problem is that moving things around in space is slow, ultimately because every molecule of fuel has to be lifted with you (for now) so using small amounts of fuel and taking a long time to get anywhere is a reasonable trade.  The idea of nuclear powered propulsion goes back to the earliest days of NASA.  Wernher von Braun, the German engineer who defected to the United States after World War II, started a program to develop systems before the moon landings.  That program, NERVA, eventually got closed down to help pay for the Shuttles.  See here for a NASA review of the program (pdf) and here for a video of a test firing.


But now, the US Department of Defense is getting interested in space-based propulsion. Last month, through a presolicitation, the US Defense Advanced Research Projects Agency announced its intent to have a flyable nuclear thermal propulsion system ready for a demonstration in 2025.

Through this Demonstration Rocket for Agile Cislunar Operations, or DRACO program, the defense agency seeks technology that will allow for more responsive control of spacecraft in Earth orbit, lunar orbit, and everywhere in between, giving the military greater operational freedom in these domains.

"Activity in cislunar space is expected to increase considerably in the coming years," Maj Nathan Greiner, manager of the DRACO Program, told Ars. "An agile nuclear thermal propulsion vehicle enables the DOD to maintain Space Domain Awareness of the burgeoning activity within this vast volume."

There are a few ways to achieve nuclear propulsion; the most accessible (and probably the most politically acceptable) is nuclear thermal power in which a reactor super heats a fuel (probably hydrogen gas) and it expands through a nozzle.


In "Phase 1" of its solicitation, DARPA has asked industry for the designs of both a nuclear thermal reactor and an operational spacecraft upon which to demonstrate it. This initial phase of the program will last 18 months. Subsequent phases will lead to detailed design, fabrication, ground tests, and an in-space demonstration. No contracts have yet been awarded, and award values will be determined by industry submissions.

With the DRACO program, the US Defense Department could potentially move large satellites quickly around cislunar space. For example, moving a 4-ton satellite from point A to point B might take about six months with solar electric propulsion, whereas it could be done in a few hours with nuclear thermal propulsion.

It's arguable that this DARPA action is being brought along by other trends going on.  First is the creation of Space Force and the recognition of the value of the High Frontier.  Second, critical enabling technologies are maturing at the right times, such as better refractory materials (able to handle extreme temperatures); in a nuclear thermal engine, Hydrogen is stored at 19 Kelvin, while "the other end" of the reactor has hydrogen heated to 2500 Kelvin - or higher.  Third, NASA is working with BWX Technologies, the company which makes most of the nuclear reactors found on US Navy submarines and aircraft carriers, on the design of a reactor for Mars missions. 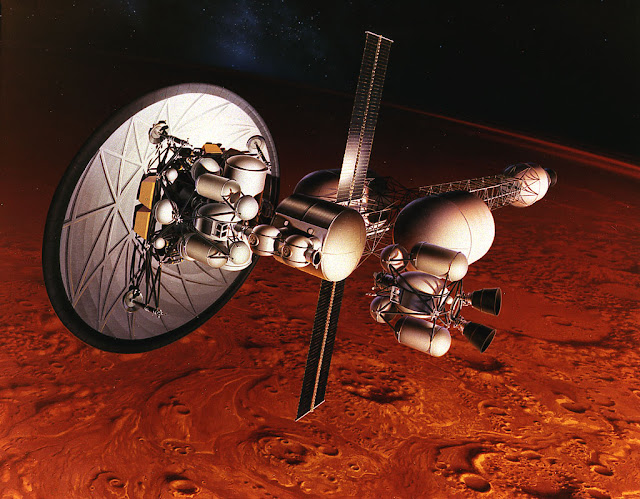 1960s artist's concept of a nuclear thermal rocket arriving at Mars.  The circular structure on the left is an aerobrake.

DARPA has a reputation for producing some of the leading edge technologies in the world.  It seems they've decided the time is right to push this one along.