In 2020, it's saying something to refer to a news story as the weirdest thing you've seen.  This story is definitely among the weirdest things I've run across this year; Wuhan flu and plagues of locusts have nothing on this.  I first saw this picked up at Ars Technica, but have since seen it elsewhere.

The US Department of Justice and US Attorney's Office in Massachusetts together announced that they had charged six former eBay employees with “leading a cyberstalking campaign" against a newsletter editor and publisher, which "included sending the couple anonymous, threatening messages, disturbing deliveries—including a box of live cockroaches, a funeral wreath, and a bloody pig mask—and conducting covert surveillance of the victims."


James Baugh, 45, is eBay's former senior director of safety and security, and David Harville, 48, is eBay's former director of global resiliency—both were arrested today and charged with conspiracy to commit cyberstalking and conspiracy to tamper with witnesses. Each charge "carr[ies] a sentence of up to five years in prison, three years of supervised release, a fine of up to $250,000 and restitution," the DOJ said.

The targets of the harassment were a couple from Natick, Massachusetts, who aren't named in the publicly released documents, but who run an online newsletter that covers e-commerce companies.  eBay managers felt the newsletter was unfair to the online auction giant.  One alleged victim is a reporter and editor for the newsletter, while her husband is the publisher.


"Members of the executive leadership team at eBay followed the newsletter's posts, often taking issue with its content and the anonymous comments underneath the editor's stories," the DOJ said.

You probably know the line from Shakespeare that goes, “Oh! What A Tangled Web We Weave When First We Practice To Deceive,” and this is quite a tangled web.  You should read the whole thing if you want the straight story.  Here's a snip.


The alleged crimes took place in August and September 2019. Four other former eBay employees weren't arrested today but face the same charges. They are Stephanie Popp, 32, eBay's former senior manager of global intelligence; Stephanie Stockwell, 26, former manager of eBay's Global Intelligence Center (GIC); Veronica Zea, 26, a former eBay contractor who worked as an intelligence analyst in the GIC; and Brian Gilbert, 51, a former senior manager of special operations for eBay's Global Security Team. Harville is from New York City while the other five defendants are from California.

"It is alleged that in August 2019, after the newsletter published an article about litigation involving eBay, two members of eBay's executive leadership team sent or forwarded text messages suggesting that it was time to 'take down' the newsletter's editor," the DOJ announcement said. Another message from one unnamed eBay executive to another said "we are going to crush this lady," according to the charging document.

The "take down" message was followed by a three-part harassment campaign by the six defendants, the DOJ said. The first phase included anonymous deliveries such as "a bloody pig Halloween mask, a funeral wreath, a book on surviving the loss of a spouse, and pornography—the last of these addressed to the newsletter's publisher but sent to his neighbors' homes." 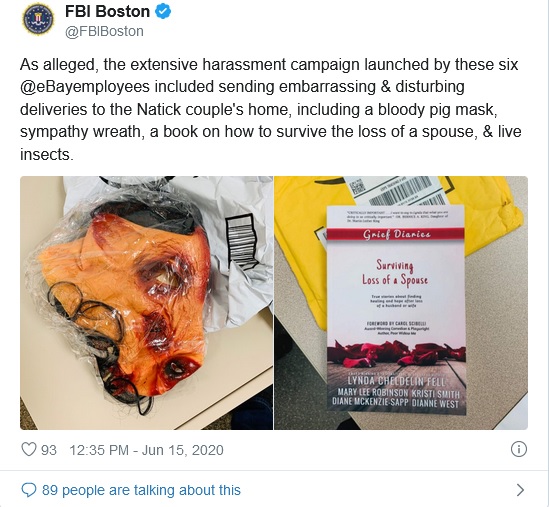 For their part, eBay said that as soon as they found out about this, everyone involved was fired.   That included the company's former Chief Communications Officer, fired last September.  It gets a little weirder: the CEO of eBay at the time of the incidents was Devin Wenig.  He was also let go of in September of  '19.  Being a CEO, there was a more public announcement than for the others let go last September.  The announcement said something intended not to scare investors, that "both Devin and the Board believe that a new CEO is best for the company at this time."  Was the ex-CEO the guy who said it was time to take down the newsletter?  Was his departure linked to this mess?