What If I Trust Science, But Don't Trust Big Government Science!

If you pay any attention at all to the drivel coming from the leftist media (the vast majority of media) you'll have heard the idea that anyone who questions anything from authority is a "science denier."  That's an awful term, crafted to create a subconscious link to holocaust deniers.

This has been rumbling in my mind a lot, but credit (blame?) PJ Media author Stacey Lennox for bringing it into focus today with her piece, "What If I Trust Science and Don't Trust Dr. Fauci?"  Her emphasis is on Dr. Fauci and the Kung Flu crisis, but it's broader than that.  Let me go with a few of her points for a while.

To begin with, she quotes Dr. Fauci himself from a US Department of Health and Human services podcast saying:


“One of the problems we face in the United States is that unfortunately, there is a combination of an anti-science bias that people are — for reasons that sometimes are … inconceivable and not understandable, they just don’t believe science, and they don’t believe authority,”

The problem is that this week, the same Dr. Fauci admitted that he lied to Americans about the effectiveness of masks. They decided to tell us masks didn’t work rather than tells us they were effective in preventing the spread, but please refrain from buying them until we have an adequate supply for healthcare workers.  Personally, I believe if they had simply said, "if you buy up all the masks and healthcare workers don't have them, we'll have to abandon hospitals because workers are required by law to wear them" that people would have been understanding and bought up fewer masks.

It's a lot easier to trust people who don't have a documented history of lying to you.  Could that be part of it Dr. Fauci?

Another topic that doesn't make sense and leaves me with Looney Tunes-style question marks in the air over my head is why is an old, well-known drug that was showing promise against the disease so politically divided?  The easy answer is that a couple of conservative commentators started talking about success with Hydroxychloroquine and then the president started talking it up.  Suddenly, liberal commentators couldn't acknowledge they might be right.  Dr. Fauci joined the liberal pundits against the drug.  Ms. Lennox (a Registered Nurse) says:


The debate over this generic drug that has been in use for decades is one of the most puzzling and ridiculous things about the entire pandemic. The medicine was politicized and became controversial. After researching it myself and listening to practicing physicians who were using it, I expected Dr. Fauci to step up and clarify why there was a reason to believe it may work in conjunction with the mineral zinc. He never did.

I found this odd since the drug’s older cousin, chloroquine had been demonstrated to inhibit the SARS virus, which has a 90% overlap with COVID-19. The NIH did this study in 2005, where Dr. Fauci is a director.


We report, however, that chloroquine has strong antiviral effects on SARS-CoV infection of primate cells. These inhibitory effects are observed when the cells are treated with the drug either before or after exposure to the virus, suggesting both prophylactic and therapeutic advantage.

Any doctor that was recommending the treatment recommended it be given with zinc. The properties of zinc on RNA viruses, which COVID-19 is, are also well known. Again a study from the NIH in 2010 shows that with a companion ionophore, or drug that allows more zinc to enter the cell, the mineral interferes with the replication of the virus. Both chloroquine and hydroxychloroquine are zinc ionophores.

When people see contradictory messages, they try to understand why one group of doctors currently treating patients with these combinations and reporting excellent success gets no press or negative press, while another group of doctors saying it's poisonous and will kill people gets all the media attention.  As result, people try to think of reasons and decades of experience with government at all levels brings thoughts of corruption to mind.  I really doubt that I'm the only guy who has heard people saying Dr. Fauci and the Anointed Health Experts must be in the pocket of Big Pharma.  After all, they argue, why use a very old, cheap, generic drug when there are newer, more expensive drugs, like Remdesivir that can be sold?   Why should they allow drugs that cost a couple of bucks per dose when there are drugs that cost a hundred or hundreds of bucks per dose?

Again, it's easier to distrust people who have lied to you before.

Stacey Lennox's article contains more good information related to the virus crisis, but if you take the same thoughts and expand them to wherever government big Science! is involved, you get similar answers.  The easy one to cite is climate change.  The trillions of dollars at stake have attracted the grifters that humongous sums of money always attract and every claim has to be carefully examined.

Another example is the USDA Dietary Guidelines.  The science behind the USDA recommendations is atrociously terrible - the King of Junk Food Science is an example of the kinds of stuff they're based on.  Part of that is because it's both ferociously hard and expensive to do the kind of experiments that can give the answers people want.  While, saying, "it's too hard" is a hell of a poor thing to say, it's better that they're honest about how tenuous their data is.  The committees drafting the 2020 Guidelines have been meeting this year and they've been more (apparently) corrupt than ever, prompting federal Whistle Blowers to come forward and report bad behavior on the part of the subcommittees involved. Full disclosure: I've donated to the Nutrition Coalition and think that their work is good.

It would be better for the USDA guidelines to be shut down and the government to get out of the business of telling people what to eat, but right now that would require many laws or regulations to be revoked because the dietary guidelines influence military meals, school lunch (and breakfast) programs, hospitals, nursing homes and all sorts of institutional programs that feed people.

Real science is a rigorous process for learning.  It's never preaching from a standpoint of "I'm all-knowing" and it's never "settled" except in the rare cases of physical law and one way you can be sure it's settled is that nobody is doing research into a field.  Nobody disputes that gravity exists; there might be research into fine details of the subject, but the fact that gravity exists is settled.

In the case of a new disease, nobody can be expected to know enough about it when it first appears.  It was quickly apparent that the doctors on front lines treating patients knew far more about it than the Experts.  Consequently, if people don't flock in admiration to the Anointed Experts, it's not that people have "an anti-science bias," it's that they know they've been lied to before or that their life's experiences tells them something funny is going on.  You see, Dr. Fauci, it's not "anti-science bias" to question things.  Questioning things is the essence of science.  Just accepting things the scientists say is the essence of religion. 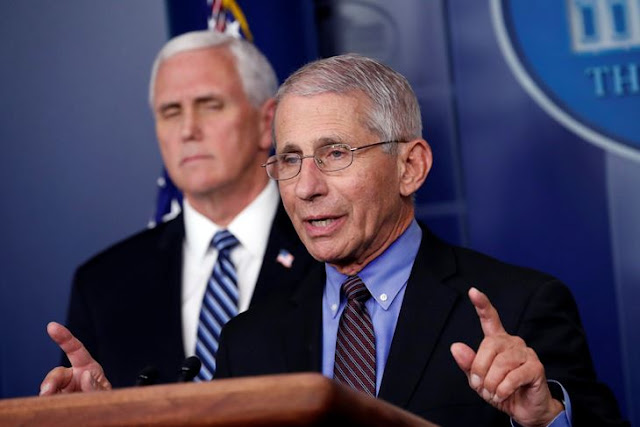