It seems like long ago - 17 whole days ago! - when we talked about SpaceX's SN4 "RUD" (Rapid Unscheduled Disassembly).  At the time I said SN5 was built and I had said, "There will be a few days work and SN5, which has been ready for weeks, will be transported to the test area."

It didn't turn out that way.  First, there was a lot of demolition and then expansion of the area where testing is done.  A new test stand was designed and built.  Concrete was poured for a new Vertical Assembly Building at the Boca Chica facility.  There were road closures and the implication SN5 or 6 would be taken to the test stand last week.  Around the first of the month, though someone had spotted an unaccounted-for tank dome outside the existing High Bay buildings.  Then the dome was identified as being made of a new alloy steel being considered for the fuel and oxidizer tanks on Starship. 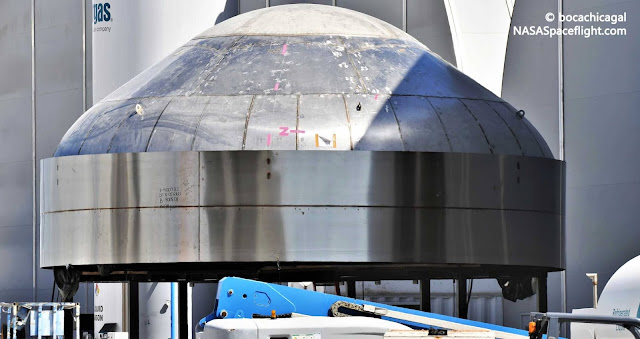 
Just like its three predecessors, the newest test tank’s purpose is relatively simple: demonstrate – at full scale – the efficacy of SpaceX’s current manufacturing processes. Back when SpaceX built and tested the first two tank prototypes in January 2020, the company was in the midst of making big changes throughout its coastal Boca Chica, Texas Starship factory – a major leap forward compared to the methods used to build Starship Mk1. While the first tank made it to 7.1 bar (~103 psi) before failing, a second tank survived all the way up to 8.5 bar (~125 psi), as did a third separate test tank built about a month later. According to CEO Elon Musk, 8.5 bar is more than satisfactory for Starship pressure vessels to safely launch humans into orbit, offering a safety margin of more than 40%.

This weekend the tank was taken to the test stand.  It was talked about that this was a major revision to the tank, being built of a different steel grade than before, because it's considered better for cryogenic temperatures than the grade stainless steel they had been using.


The most obvious reason to build a new test tank after the success of full-scale Starship prototype SN4 is a substantial change in the steel alloy SpaceX is building rockets out of in South Texas. CEO Elon Musk has teased such a shift for almost a full year and it appears to have happened right on time – if not ahead of schedule. SpaceX currently uses 301 stainless steel for Starship production, while the new material – discussed earlier by Musk and confirmed by inscriptions on the exterior of what would later become the fourth test tank – is a slightly different 304 steel “with higher ductility” (malleability).

I recall seeing the mystery dome marked 304L (I've just spent 20 minutes looking for the picture), and I looked it up on the Materials Web: 304L gets that improved ductility by using a lower percentage of carbon in the steel.

Today the tank was tested.  The comments are saying it was intended to be a test to failure and they succeeded at failing.

A commenter on YouTube quotes Elon Musk.  I'll have to go with his report since there's nothing on any of the spaceflight news sites I comb saying one way or another.


From Elon's twitter: "Tank didn’t burst, but leaked at 7.6 bar. This is a good result & supports idea of 304L stainless being better than 301. We’re developing our own alloy to take this even further. Leak before burst is highly desirable."

Note: the action starts about 30 seconds in to this 2:15 video.  Before that you'll see a set of straps over the tank, apparently to hold it to the stand and keep it from flying away in pieces should it fail like some previous tanks have failed.