NASA's Next Mars Rover Slips - Has Burned Half The Launch Window

I haven't posted much about it, but NASA had scheduled the launch of its next rover, named Perseverance in a national contest, for the beginning of the opposition launch window in July.  It's a 20-day window opening July 17.

Ars Technica's Eric Berger reports today that the launch has slipped to No Earlier Than July 30. Thirteen days is over half the 20 day window.  Worse, an official launch date has not been named.


A problem arose during a Wet Dress Rehearsal test earlier this month. During this standard prelaunch test, an Atlas V rocket is fueled with propellant and a countdown is conducted until the final moments before ignition. So what happened? "A liquid-oxygen sensor line presented off-nominal data during the Wet Dress Rehearsal, and additional time is needed for the team to inspect and evaluate," NASA said in a statement on Tuesday afternoon, in response to a query from Ars.

A source in Florida indicated that the issue was related to the Atlas V rocket's Centaur upper stage, which is fueled with liquid hydrogen and liquid oxygen.

It's clear from the text that United Launch Alliance (ULA) hasn't resolved the issue with the liquid oxygen sensor.  The spacecraft had not been stacked on the launch vehicle, an Atlas V in the 541 configuration (five is the fairing diameter in meters, four is the number of solid rocket boosters, and the one is for the single engine Centaur upper stage).


The $2.1 billion rover is similar to NASA's Curiosity rover but contains several upgrades, including the addition of a small helicopter, and it will launch on the 541 configuration of the Atlas V rocket. NASA originally set a launch window from July 17 to August 11, the optimal period for the rocket to launch, and for Perseverance to reach Mars within about six months.

The launch has since been delayed from July 17 to July 20 due to a crane issue during the stacking process; it was again delayed from July 20 to July 22. NASA attributed the latter setback to "a processing delay encountered during encapsulation activities of the spacecraft."

The small helicopter intended to fly on Mars was covered here in May of 2018.

This third delay now starts making the end of the launch window look scarier and NASA has started to evaluate how far into August they could launch and still make their mission.  So far they extended the window until August 15 and are examining whether the launch window can be extended another few days.


If the Perseverance mission misses this launch window, it would be delayed 26 months, at a cost of hundreds of millions of dollars, until the next Earth-Mars conjunction in 2022. 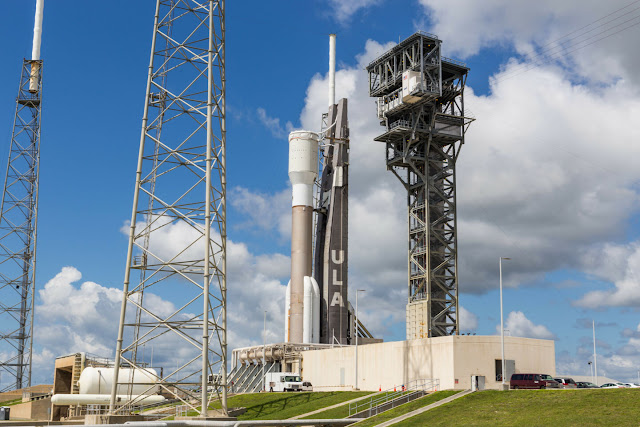 The Atlas V with Centaur Upper Stage, but no Mars Perseverance rover and no launch fairing.  This is around the day of the Wet Dress Rehearsal within the last week or so.  ULA Photo.

Here's hoping ULA figures out what needs to be done and gets this launch off in time.