While doing some searches for something I knew I had written here, I stumbled across this post, almost 10 years old to the day.  I had a surprise while going through it, when I clicked on the link to a 12 year old, nearly 10 minute long YouTube video, linked in the second paragraph.  It's worth some time to look around in that video, even if you don't sit for the full thing.

I repost it here because on its 10th birthday (almost), it's as true as it ever was.  Earlier in the year I thought of repeating more 10 year old posts, but finding them isn't always easy.

The Atomic Bomb of Argument 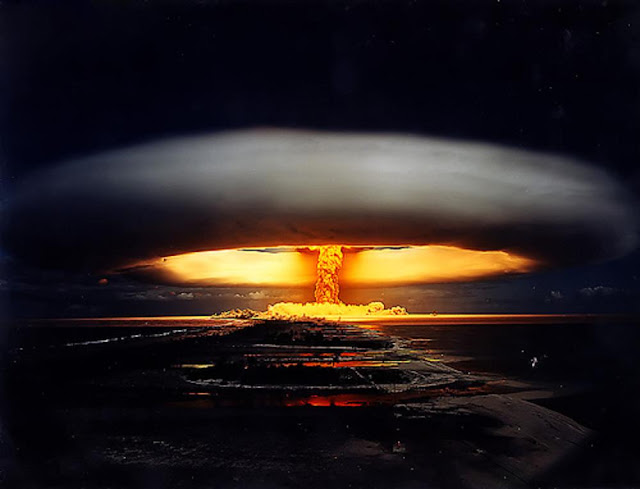 In the world of the Internet, a law of argument has been recognized, called Godwin's law of Nazi Analogies, which says that any argument long enough leads to an invocation of Hitler or Nazis.  As usually stated, "As an online discussion grows longer, the probability of a comparison involving Nazis or Hitler approaches 1."  The idea is that the accusation of being a Nazi is so outrageous, and Nazis are so socially unacceptable, that when charged with being one, the accused will drop whatever they are arguing to counter that they are not a Nazi.

This idea, while not specifically the Nazi allegation, is widely used in domestic politics and is the part of the reason behind negative attack ads.  If candidate Phlegm says that candidate Halitosis has done some negative thing, Halitosis generally has to issue an ad showing how he hasn't done it.  For Phlegm, it's a win-win scenario.  He gets Halitosis to spend money and time on the made-up charge, and it gets the opponent "off-message."  Halitosis is not talking about what he really wants to talk about, but is instead talking about what Phlegm wants him to talk about.  As for the dumb voters, who don't really pay attention anyway, they become vaguely aware that Phlegm and Halitosis are both talking about this negative thing and learn the association that Halitosis is the bad guy ("where there's smoke, there's fire!").

If the Nazi charge is the WMD of online argument, the charge of Racism is the atomic bomb of daily discourse.  So when the NAACP raised the charge of racism against the Tea Party, this was the purpose.  It made people trying to reduce the insane government spending get off their message and address the fact that they aren't racist.  It made some people waste time and money to respond to it.  It made headlines that stupid voters will notice without reading any details to, and may influence them.  It's a blatantly transparent political move in what has become simply a "wholly-owned subsidiary" of the Democratic Party.

This may shock some people, but I don't really believe there is such a thing as race.  I believe there are nationalities, and people from different areas of the world look different, but those differences are superficial and go away as cultures blend.  As I was doing my little research to help gel my thoughts for this article, I was surprised to see PBS (of all places) basically doing a program that sums up where I am, to about the 75% level - Race - the Power of an Illusion.  I'll add a few notes in this edited summary from that web site, and I remove things that I think are just PBS being the liberal spin machine they are.

1.  Race is a modern idea....The English language didn't even have the word 'race' until it turns up in 1508 in a poem by William Dunbar referring to a line of kings.
2.  Race has no genetic basis. Not one characteristic, trait or even gene distinguishes all the members of one so-called race from all the members of another so-called race.
3.  Human subspecies don't exist. ....Despite surface appearances, we are one of the most similar of all species.
4.  Skin color really is only skin deep.  Most traits are inherited independently from one another. The genes influencing skin color have nothing to do with the genes influencing hair form, eye shape, blood type, musical talent, athletic ability or forms of intelligence. Knowing someone's skin color doesn't necessarily tell you anything else about him or her.
5.  Most variation is within, not between, "races." Of the small amount of total human variation, 85% exists within any local population, be they Italians, Kurds, Koreans or Cherokees. About 94% can be found within any continent. That means two random Koreans may be as genetically different as a Korean and an Italian.
6.  Slavery predates race. Throughout much of human history, societies have enslaved others, often as a result of conquest or war, even debt, but not because of physical characteristics or a belief in natural inferiority. Due to a unique set of historical circumstances, ours was the first slave system where all the slaves shared similar physical characteristics.
7.  Race and freedom evolved together. The U.S. was founded on the radical new principle that "All men are created equal." But our early economy was based largely on slavery. How could this anomaly be rationalized? The new idea of race helped explain why some people could be denied the rights and freedoms that others took for granted.(SiG answer: but you do know that the whole 3/5 of a person thing was intended to end slavery, right?  To put pressure on the deep south to free their slaves, and get more representatives right?)
8.  Race justified social inequalities as natural. As the race idea evolved, white superiority became "common sense" in America. (SiG answer: not anymore, and not for my life)
9.  Race isn't biological, but racism is still real.  Race is a powerful social idea that gives people different access to opportunities and resources. (SiG: liberal bullsh*t diatribe deleted)
item 10 deleted.  I think it's complete bullsh*t, and is there simply because PBS can't shake their liberal mentality.

Rather than the item 10 PBS used, I would much prefer to envision the world Martin Luther King did, in his famous, "I Have a Dream" speech.  I have a dream that my four little children will one day live in a nation where they will not be judged by the color of their skin but by the content of their character. - Martin Luther King, August 28, 1963

Are there really racists?  Undoubtedly - as I've said before, if 5% of the people don't believe we went to the moon, some small percentage are going to believe anything.  Are there any in the Tea party?  If the Tea party is a random sample of the population, there would be some, sure.  I would bet there's at least as many racists in the NAACP itself.