SpaceX is Apparently Having Falcon 9 Problems

Back in June, SpaceX had scheduled the launch of the 10th Starlink satellite mission for the 22nd, a Monday.  That launch was delayed 24 hours until Tuesday, then Thursday and finally Friday.  On that Friday, they simply said,


“SpaceX is standing down from today's launch in order to allow additional time for pre-launch checkouts in advance of its tenth Starlink mission.  Falcon 9 and its payloads, 57 Starlink satellites and 2 satellites from BlackSky, a Spaceflight customer, remain healthy.  SpaceX teams are evaluating the next earliest launch opportunity and will announce a new target date once confirmed.”

The “next earliest launch opportunity” was last week, originally on Wednesday the 8th, but that one was scrubbed due to afternoon thunderstorms.  Launch was reset for Friday morning, but when I got up and set to watch, SpaceX said it was further delayed until Saturday the 11th.  That in turn was scrubbed with a shorter statement; the first sentence of the paragraph above.

During the Wednesday scrub, they did something unusual that caught my eye.  The launch was scrubbed with 10 minutes left in the countdown, but they opted to run the countdown, fueling the vehicle completely and running lots of other operations until the T minus 1 minute mark (when the Falcon 9's computers take over things), “for data collection.”  I've never heard them say that; I've never heard anyone say that.

Something seems wrong.  The booster for this mission, B1051, was to fly its fifth mission, so since only one has completed five missions successfully, attention focuses on the first stage.  Along the way, I had heard that there was a static firing of B1051 but that they never specifically said it had passed.  It's hard to imagine them proceeding if it didn't pass, but not stating it passed is just another oddity that people are noticing.  Are they seeing something in the data during a countdown test that isn't normal but doesn't really mean a failure?  Are they seeing something fail then start working, or something that fails sometimes?

Then, Monday the 13th, SpaceX announced that the mission to launch a South Korean military satellite called ANASIS II set for No Earlier Than yesterday, July 14th, had also been delayed indefinitely to allow teams to inspect the Falcon 9 rocket’s upper stage and potentially replace hardware. Upper stage?  That's different.  Since the upper stages are always new, do both of these upper stages have a problem?  Or not necessarily even a problem, just something that “don't seem right?”

Whatever it was they wanted to look at, they seem to have regained confidence in it.  Spaceflight Now reported today that:

That mission, by the way, will use the booster from the first manned Crew Demo mission on May 30th, B1058.  If that mission flies on Sunday, it will be 51 days from launch, through recovery, refurbishment, and relaunch.  The previous record is 62 days.

There have been eight announced launch dates for the Starlink 10 mission; I don't know if they consider all eight to be scrubs, but until now they've been going pretty much like clockwork, whenever the mission is scheduled.  Maybe they scrub due to weather or some typical little problem, but they don't scrub eight times, spread over most of a month.


As of July 1st, SpaceX has completed 11 launches in 2020 and has at least another 16 within tentative launch targets in the second half of the year. To complete all 16, the company would have to average almost three launches per month for the rest of 2020, a cadence it’s only managed to sustain for two or so months at a time.

Starlink mission 10 still doesn't have an announced launch date and appears to be holding up several additional launches.  It would be interesting to learn what caused the eight launch delays. 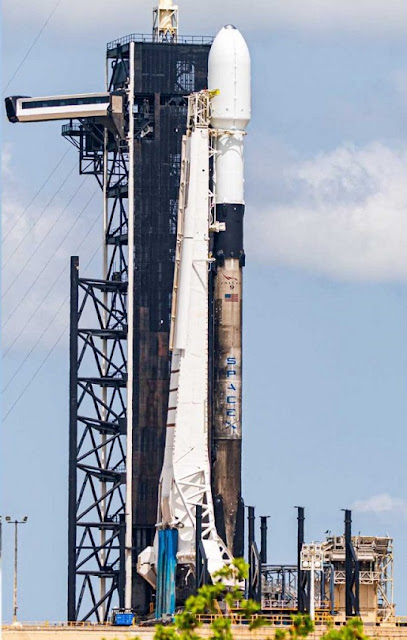 An “experienced” Falcon 9, apparently ready for a Starlink mission from Pad 39A at the Kennedy Space Center.  (Richard Angle/Richard Angle/NASASpaceflight photo)  I'd like to say it's B1051 and the Starlink 10 mission, but it's not identified that way at the source.