U.S. Conference of Mayors Adopts Resolution in Favor of Reparations

The U.S. Conference of Mayors released a letter backing a Democratic plan to form a reparations commission to come up with a payment for slavery.  While the mayors didn't address the cost, one study by a small group of college professors has suggested it could reach $6.2 quadrillion.  For those people who aren't familiar with the word: a quadrillion is a thousand trillions or a million billions, so that's $6,200 trillion.


Bedard reported a study called "Wealth Implications of Slavery and Racial Discrimination for African-American Descendants of the Enslaved" recommended a payment of $151 million to each descendent of a slave.

He explained the study essentially calculates the unpaid hours slaves worked, a price for massacres and discrimination, and adds interest.

The study states, "Whether the full cost of slavery and discrimination should be compensated, or only a portion, and at what interest rate remain to be determined by negotiations between the federal government and the descendant community."

It's worth noting that's quite a bit more than "all the money on earth."  Wikipedia tells us that the Gross Domestic Product of the world for 2019 was about $88 trillion, making the reparations about 70 years worth of all the money in the world, assuming zero growth in world GDP and 100% of the world GDP going to the American descendants of slaves.  Of course, there have been no slaves in the US since the 1860s unlike today's middle east or lots of other countries.  The US produces 2/3 of the world's GDP, so since we'd be the only country paying this, it consumes our entire GDP for 105 years.

Since only about a third of the American population pays income tax, or about 100 Million people, the tax bill due American taxpayers amounts to $62 million per taxpayer.

Those numbers indicate it's impossible.  It'll never happen.  I can imagine no scenario in which the total economic output of the US could be collected for 105 years; that's at least four generations of people.  Then consider that all of these numbers are based on American people for the next 105 years not getting anything they work for.  Since letting them starve to death would mean zero tax collected, we couldn't collect 100%.  Which stretches 105 years out even farther.  They're saying they want reparations for slavery by enslaving the next six or seven generations of Americans?  That's not reparation, it's revenge.

What could they do?  If they played Liz Warren and stole every penny from every billionaire in the US, I don't think we could drop that $6200 billion bill down to $6,000 billion; most of that wealth is in the hardware of the companies they own, it's not like they're swimming in gold coins like Scrooge McDuck.  If they tried to create $6.2 quadrillion from thin air, as they've done with economic stimulus for the last (nearly) 50 years, the dollar would collapse to worthlessness.  It would literally be worth less than paper it's printed on.

WND concludes with this cheery thought.


If American taxpayers think, however, they're going to get by with paying only $6.2 quadrillion, they shouldn't put away their checkbooks just yet.

The same study claims the value of lost freedom to Japanese American World War II internment detainees could be $16 quadrillion.

I certainly hope there are some adults in the room that will tell them how insane these ideas are. 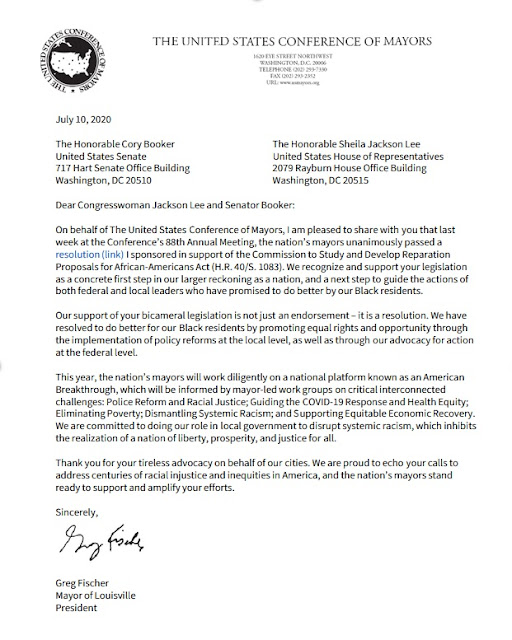 The letter.  Screen capture from SCRIBD.