As the teacher's unions fight reopening schools, Daniel J. Mitchel (his own home on the webz) writes a piece for FEE (the Foundation for Economic Education) on just how bad the public school situation is.  A few things jumped off the page to bite me.

Let me start, as Mitchell does, by re-posting a graphic I must have posted a dozen times since 2013 when Cato published this.  This is about the costs of education vs the improvements in test scores. 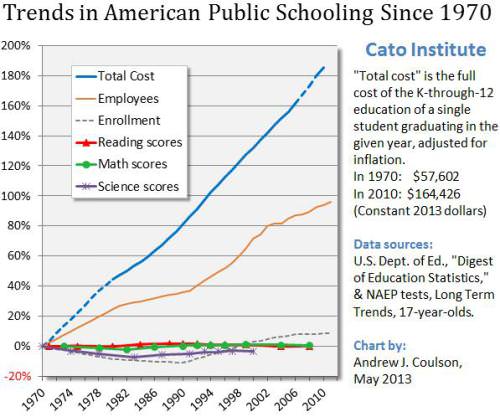 You can see that total cost almost tripled, the total number of employees almost doubled while test scores were not affected at all.  Unless you're immune to measured data, you have to agree that no matter what we spend on education, it doesn't affect test scores.  There's no discernible positive trend such that someone could say "we only tripled what we spent, the data says we need to spend six times more" or any other number.  It's just as valid to say that since whatever we spend doesn't make a difference let's just not spend anything at all or let's cut spending to 1/10 of its current level and send the administrative staff home.  As Daniel Mitchell says, Andrew Coulson produced a graphic here that is probably more vivid and more telling than the vast majority of graphics you'll come across.

I mentioned some things jumped off the page at me, here's a paragraph from a paper Mitchell references:

Doubtless, you've heard statistics like 0% of graduating high school students in Baltimore are proficient at math.  That may be an extreme example but the trend is sadly not unusual.  Nationwide, only about a third of eighth graders do math or read at their grade level.

When I read things like the LA teacher's union saying they won't allow the schools to open until officials adopt absurd changes like closing charter schools, defunding the police, and creating medicare for all it helps explain why the expenditures keep going up for no return. After all, if they want those things, are they intelligent enough to teach children?

When I was in my 20s, it wasn't unusual to hear retirees my current age saying "why am I paying taxes for schools that I don't use?"  The stereotype answer was that schools provide an educated public which benefits us all, so you're getting benefits from that tax money.   It's more and more apparent that we're getting essentially nothing for our money.

As the modern saying goes, if taxes are the price we pay for living in a civilized society, I want my money back.