Back on March 24, I posted a story that had surprised me.  A mission had been planned to launch into polar orbit, going south from Cape Canaveral and over Cuba but was being postponed due to the Coronavirus lock downs.  What surprised me was that it was to be the first polar orbit launch from the Cape in nearly 60 years; since November 1960 to be precise.  It also gave me one of my favorite paragraphs I've ever read in space reporting.


Castro filed a complaint at the United Nations, and Washington sheepishly conceded the possibility that “fragments from the rocket booster” could have landed in Cuba. CIA Director George Tenet later quipped somewhat tastelessly that it was “the first, and last, time that a satellite had been used in the production of ground beef.” Further launches overflying Cuba were postponed, and improvements were made to the Cape Canaveral range-safety system. In any case, it was a dejected NRL group that returned to Washington.”

SpaceX was to launch an Argentine satellite, the twin to one they launched in '18, and everything was proceeding on schedule until the Argentinian government prohibited Argentina’s National Commission for Space Activities (CONAE) teams from traveling to the US.


The SAOCOM-1B satellite will join its L-Band, synthetic-aperture radar (SAR) SAOCOM-1A sister satellite in a sun-synchronous orbit (SSO) – essentially an orbit over the poles of the planet that allows the solar arrays of the satellite to be in sunlight at any given time. The satellites operate in SSO and use L-Band and synthetic-aperture radar to create two-dimensional, all-weather Earth observation imagery to assist in global disaster-monitoring efforts. The sister satellites will also work in conjunction with a constellation of four Italian satellites already in orbit operated by COSMO-SkyMed.

The launch had been scheduled for NET March 30th and the delay meant the satellite had to go into storage since mid-March.  The travel bans have been lifted and the team needed on the Cape for satellite support returned to the US two weekends ago.


On Monday, July 13 the team was able to get to work on launch campaign tasks with the satellite that had endured months of storage. The team ensured the health of the satellite and completed a full launch day simulation managed remotely from locations in Florida and Argentina. Following a successful run through and check of the satellite’s operational status, the launch campaign has just a few remaining steps before rocketing SpaceX into the history books once again.

The launch trajectory is slightly east of due south from the Cape, so rather than overhead down the coast it will be slightly east of that.  It gets better.  The 6600 lb payload is considered light enough for the Falcon 9 that the booster – I assume it's reused – will be able to perform a Return to Launch Site (RTLS) recovery, touching down at one of SpaceX’s two Landing Zone (LZ) pads on the Cape.  That implies the booster could go close to overhead and be visible on the way back, too. 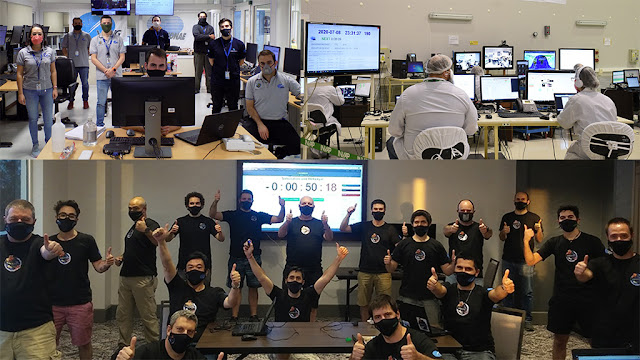 According to CONAE, the SAOCOM-1B mission launch window extends from Saturday, July 25 to Thursday, July 30 with a targeted liftoff at approximately 7:19 p.m. EDT (2319 GMT) from launch complex 40.  Sunset here is 8:16 PM so it's possible the booster will be lit from the side by the low sun and brighter than the sky, making it easy to see and track.  If we're lucky.